In Maryland County, A Sanctuary City Bill Was Torpedoed By Legal immigrants, Some Of Whom Supported Clinton 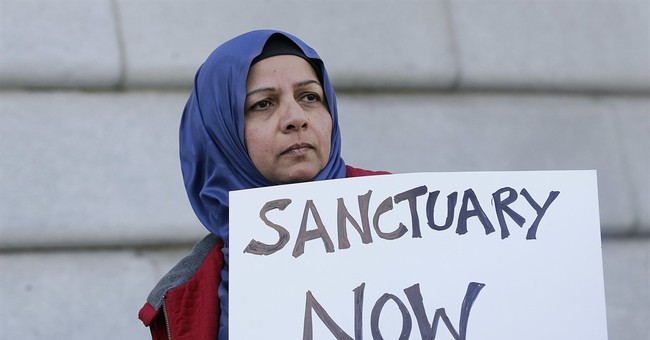 In this Maryland city, a bill to make it a safe haven for illegal aliens was stifled, not by conservative Republicans, but by legal immigrants, some of whom supported Hillary Clinton. It’s something that liberals simply don’t understand. Legal immigrants and illegal immigrants should pretty much be together on this issue, right? Wrong. Legal immigrants see sanctuary city status as something that denigrates and cheapens their long road to legal status or naturalization. It’s no secret that for those who want a green card or become U.S. citizens, the process could take years. Yet, these people who entered illegally, who have broken federal immigration laws, get a free pass because that’s what liberal Democrats want? Right now, sanctuary city legislation is being considered as a way to fight President Trump’s agenda. Yet, in deep blue Maryland, naturalized citizens torpedoed that initiative. Who knew that for people who came here legally and went through the process would act so negatively? I’m being sarcastic of course. To make the irony more explicit, even former illegal aliens, who in their lifetimes have worked their way to green card status and eventually citizenship, say that they’re opposed to sanctuary city ordinances. The New York Times had more, though I would add that this is hardly surprising:

At first blush, making Howard County a sanctuary for undocumented immigrants had seemed a natural move: The county has twice as many Democrats as Republicans and a highly educated population, full of scientists and engineers. One in five residents was born abroad.

But the bill met stout opposition from an unlikely source: some of those very same foreign-born residents.

In passionate testimony before county legislators, and in tense debates with liberal neighbors born in the United States, legal immigrants argued that offering sanctuary to people who came to the country illegally devalued their own past struggles to gain citizenship.

Some even felt it threatened their hard-won hold on the American dream.

Their objections stunned Democratic supporters of sanctuary here and helped bring about the bill’s demise in March. A similar proposal for the state collapsed this month in the Maryland Senate, where Democrats also hold a two-to-one advantage. Some of the same immigrants spoke out against it.

The Times then went through various stories from legal and naturalized citizens, where both groups also emphasized the rule of law and the growing crime rates when gangs like MS-13 entered the picture [emphasis mine]:

Growing up in China, J. D. Ma shared a small room with his parents and sister in a communal apartment in a working-class district of Shanghai. They had to take turns with two other families — 14 people in all — to use a single bathroom.

His maternal grandfather, a history teacher, was sent to a labor camp in 1957 under Mao Zedong. The family eventually received a letter saying he had committed suicide.

But still, they considered themselves lucky: They lived in the city. They had running water.

Why, they asked, were naturalized citizens like Mr. Ma so threatened by the act of protecting people living in the country illegally — many of whom had worked just as hard, and put down roots of their own, thanks to years of lax immigration enforcement and an economy that depended on their labor?

Undocumented immigrants, after all, live much more tenuous existences. Mr. Ma said that a liberal friend had chided him for not understanding his own advantages, compared with “people who were here babysitting and doing all the cleaning and cutting grass for people.”

Mr. Ma has thought about this argument a lot. But he has concluded that it is irrelevant to the broader issue of legality.

Many Hispanics welcomed Democrats’ efforts to make Maryland a sanctuary. Stanley Salazar, 37, did not.

A carpenter in Silver Spring, he compares living in the country illegally to being a guest in someone’s home: Be on your best behavior. Make your bed and do the dishes. Any misbehavior — drinking and driving, for example — could mean you are no longer welcome.

Mr. Salazar, who is from El Salvador, knows this because he himself was illegal.

His journey back, and to American citizenship, was long, but compared with more recent immigrants’, relatively painless: He left law school in El Salvador in 2001 and traveled to Maryland on a tourist visa, but violated its terms by painting houses for cash. After several extensions, his visa expired. But he spoke English, thanks to his mother’s tireless teaching. She had a green card. And he had a driver’s license, a bank account and a car. By 2007, he had his own green card.

Now, he lives in a small house with his wife, their daughters and his mother, 73, who rides the subway into Washington every morning to her job serving sandwiches in a museum.

Mr. Salazar thinks sanctuary would be bad for Maryland. He bases this on what has already happened in Montgomery County, where he has been part of a Hispanic population boom.

The Salvadoran gang MS-13 has gained strength in the area recently, the authorities say, partly because of an influx of undocumented children arriving without their parents. The young arrivals are more susceptible to recruitment by gangs.

Well, that’s odd. When conservative Republicans talk about border security in relation to enforcing existing federal immigration laws, fighting crime, and how it’s unfair to legal immigrants—they’re labeled racists, anti-immigrant, and xenophobic. As a naturalized citizen, I’m for enforcing federal immigration laws because that’s what societies based on law and order do. They enforce the laws. They protect and define its borders. And if you come here illegally, you’re out. It’s refreshing to see Immigration and Customs Enforcement begin to do their jobs again. It seems that even some in the immigrant communities have the same concerns exhibited from those who want to see our immigration laws enforced.

The Times mentioned that both of the Asians featured in this piece, Mr. Ma and Mr. Pal, are Democrats and voted for Clinton, but are against these forms of legislation. Mr. Pal, an Indian-American, is quoted saying that the Democrats have moved too far to the Left on immigration.

“You see the Indians get very angry because they have suffered so much to get a green card,” he said. “Do we really want more illegal immigrants in our country?” he said. “I don’t think the answer is yes.”

Mr. Pal would rather have emphasis be refocused on enhancing legal immigration. There was not a single controversial view uttered by these naturalized citizens in this article. Yet, since they opposed sanctuary cities, they’ll be called racists and hypocrites because well, it’s easier for liberals to do that than persuade them to their view. And the reason they can’t is because sanctuary cities are very, very bad aspects of social policy.