Rush Limbaugh To VP Pence: What’s The Point In Voting Republican If They Keep Voting For Democratic Spending Bills 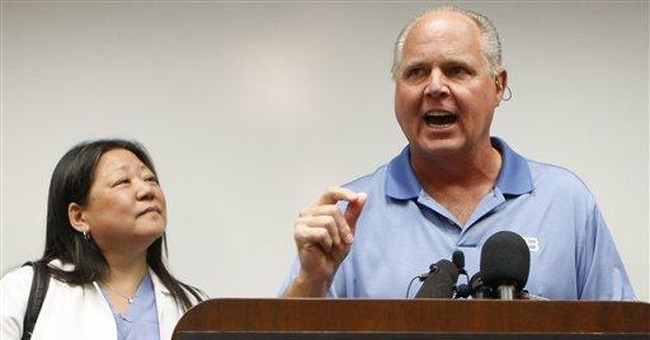 Yesterday, conservative radio host Rush Limbaugh had Vice President Mike Pence on his show, where he asked a very pointed question about the latest spending bill: why even vote Republican if this is what we’re going to get from our representatives in Congress. The government will remain open until September thanks to a $1 trillion spending bill that cuts nothing. Planned Parenthood and Obamacare programs are funded. The border wall really isn’t mentioned either. No wonder why this is being hailed as a Democratic win. It just proves that Democrats still have a lot of pull up on the Hill (via Reuters):

The U.S. Congress, bitterly divided for years along party lines, may be mapping a bipartisan path forward that skirts around President Donald Trump when he refuses to engage constructively with lawmakers, Democrats and some lobbyists said on Monday.

The path was discernible in a nearly $1.2 trillion federal spending deal carved out over the weekend to avert a government shutdown. It had Democratic fingerprints all over it, even though Republicans control Congress and the White House.

White House budget director Mick Mulvaney said Trump will sign the 2017 budget bill when he receives it from Congress on Thursday or Friday. Trump, in an interview with Bloomberg on Monday, said he was "very happy" with the deal announced late on Sunday.

Democrats claimed victory on issue after issue in the agreement, which will keep the lights on in Washington through the end of the federal fiscal year on Sept. 30, provided it holds up and wins final approval as expected.

Trump scored a partial win, getting a commitment for up to $15 billion in additional funding for a military buildup. That was about half of what he originally asked for.

The spending deal preserved funding for healthcare provider Planned Parenthood, which has drawn Republican ire because it performs abortions; for the Obamacare healthcare law; and for an array of environmental and other domestic programs Trump wanted to slash.

The bill is also 1,665 pages longer than the $1 trillion Obama stimulus bill that was passed in 2009. House Democrats helped carry the GOP bill to passage, with 178 voting for the measure. They were joined by 131 Republicans, though 103 of them voted against it, along with 15 Democrats. So, what did the vice president have to say? Well, it was to tout the increase in military spending. Rush aptly noted that a $21 billion increase in military funding is a small price to pay as a Democrat when you get the refugee resettlement program, EPA programs, sanctuary cities, and Planned Parenthood fully funded. When asked why the Republicans should just push this through via reconciliation, Vice President Pence reiterated the military spending talking point (via Real Clear Politics): [relevant portion of transcript below]

RUSH LIMBAUGH: We welcome back to the program the vice president of the United States, Mike Pence. Welcome back, sir. Great to have you here with us today.

THE VICE PRESIDENT: Rush Limbaugh, it is an honor to be with you always. Thanks for having me on.

RUSH: If this is what happens, Mr. Vice President, why vote Republican? What is the point of voting Republican if the Democrats are gonna continue to win practically 95% of their objectives, such as in this last budget deal?

THE VICE PRESIDENT: Well, look, respectfully, Rush, I actually think this was, as the president said a little a while ago, I think this was actually a clear win for the American people. Look, you’ve had Washington, D.C., that has been, you know, paralyzed by gridlock and partisan infighting for many years, and in this new president you have someone who was able to bring people together and make a $21 billion increase in defense spending at a time of great challenge for America’s interests around the world. And that’s a — you know, he spoke about that today, surrounded by a lot of great members of the United States Air Force. And it was also a piece for years, Democrats in Washington insisted that any increase in defense spending would be matched with an increase in domestic spending.

So you gotta grow government at home if you’re gonna, you know, invest in our national defense. This ended that. I mean, in a very real sense this was a game-changer because we’re just back to putting the safety, security, and the national defense of the American people first, and I think it sends, having just traveled around the Asian-Pacific representing the president over the last couple of weeks, I think this sends a decisive message to the world that under President Trump’s leadership we’re gonna make the strongest military in history even stronger.

RUSH: If I’m the Democrats, $21 billion, 15 billion for defense that was not originally authorized, that’s a small price to pay for continuing to fund refugee resettlement, continuing to fund Planned Parenthood, continuing to fund sanctuary cities, continuing to fund the EPA, and not build the wall. The Democrats clearly think this is a big win, and they’re confident they can block Trump’s agenda after this spending bill for the rest of Trump’s term. There isn’t anything of the president’s agenda in this budget, and people are beginning to ask, when’s that gonna happen? If you’re gonna shut it down in September, why not now?

RUSH: If you complain about 60 votes today, why not go budget reconciliation for 51 votes and smoke ’em?

THE VICE PRESIDENT: Rush, let me be real clear. The number one priority of President Trump is to rebuild our military, to restore the arsenal of democracy. And I gotta tell you, to get Democrats in Washington, D.C., to agree to a $21 billion increase in a short-term budget bill — and, you know, the president’s calling for the largest increase in military spending since the Reagan administration in the upcoming budget, I think is no small — it’s no small accomplishment.

As with the health care bill, the Democrats made themselves look like they’re the adults in the building, which is undercut by their antics during that (dis) unity tour, where Democratic National Committee chairman Tom Perez was booed and heckled. The beacon of hope for the party rests with a man who isn’t even a member of the party—Bernie Sanders. And they have even addressed the issues that drove Obama voters to flip for Trump. They’re still confident that being anti-Trump is enough to win. I’m not so sure about that. In the short term, the Democrats won this fight. It’s hard to argue against that—and this bill should infuriate any Republican.