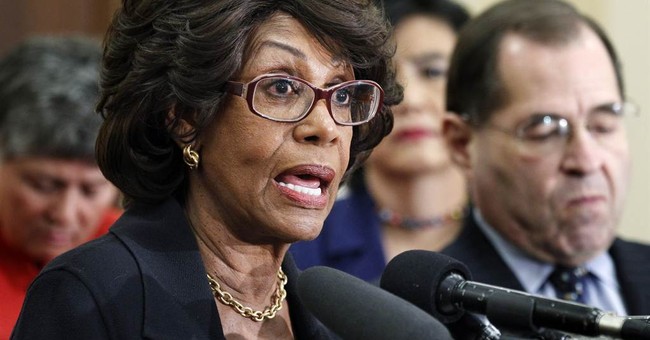 At a gala event held by EMILY’s List, Rep. Maxine Waters (D-CA) went on another tirade against President Trump. This time she got downright personal, calling him a “disgusting, poor excuse of a man” (via The Hill):

We must take our anger, our pain, our collective strength to right this wrong, to resist this tyranny and to save our democracy from a man whose immoral character and distorted thinking are an imminent threat to our nation,” she said.

Waters called Trump a “disgusting, poor excuse of a man” and slammed his Cabinet as “ill-prepared, right-wing billionaires.”

“I am not a fan of the word impeach, but I want him impeached. That’s what he deserves,” she said, reiterating a call she's made often since Trump's inauguration.

Being a California Democrat, Waters can and will say things that are the nothing short of ludicrous because she faces no political consequences. In fact, she’s probably saying what her constituents want to hear. This is the epitome of a tantrum. Trump deserves to be impeached? Why? Because he beat Hillary Clinton in the election and that ruined your plans? That’s the answer I would expect to hear from a six-year-old. Also, Trump isn’t the devil personified, though I understand that many on the Left make him out to be that way. Our republic is not in danger. We’re not on the precipice of tyranny. One would take the position that Waters should take a chill pill, maybe multiple ones, but I think she should continue to rage. We should make her the face of the party, one that is filled with rage and anger, but no agenda to help the very people who voted for Trump. The voter Democrats could easily win back if they have a solid economic, job-creating agenda. They’re not doing that, which shows that the coastal elites still don’t get it.

This isn’t the first time Waters has gone off the deep end. She peddled some conspiratorial crap about Rep. Jason Chaffetz (R-UT), implying that he might have ties to the Kremlin. There is no evidence to suggest a scintilla of that tin foil hat fodder. She is firm in her stance that she will fight for Trump’s impeachment every day. She also said that the Mr. Trump has no business being president. Well, Ms. Waters—that’s not how any of this works. You win the presidential election, you become president. Period. I certainly look forward to your next anti-Trump tantrum. You’re making your entire party look unhinged.