Gillibrand: I'm Not Running For President In 2020 Either 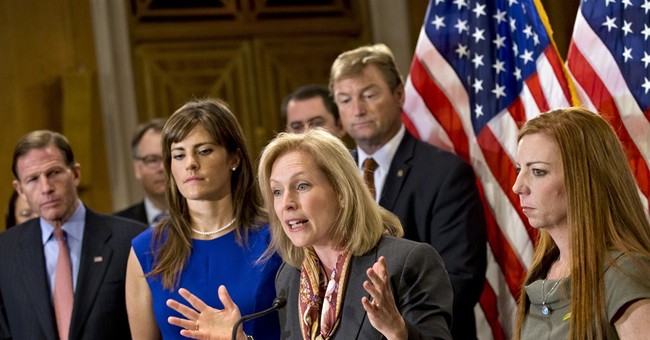 Sean Langille at The Washington Examiner had this update from Sen. Kristen Gillibrand (D-NY), who said that she would be focusing her 2020 plans on getting re-elected to the U.S. Senate:

New York Democratic Sen. Kirsten Gillibrand, says she is "focused entirely" on her Senate re-election efforts and will not pursue a 2020 White House bid.

"I'm focused entirely on running for Senate, so yes, I'm ruling it out," Gillibrand told reporters during a stop in upstate New York.

Former Vice President Joe Biden also ruled out running in 2020, recently making the announcement in New Hampshire. So, who the hell is left? The list is well extensive, but filled with unknowns (via NYT):

In the Senate alone, as much as a quarter of the Democrats’ 48-member caucus are thought to be giving at least a measure of consideration to the 2020 race, among them Cory Booker of New Jersey, Kirsten E. Gillibrand of New York, Amy Klobuchar of Minnesota and Kamala Harris of California. All are closer to 40 than 80.

Representative Seth Moulton of Massachusetts, a 38-year-old veteran of the Iraq war who has been a pointed critic of Mr. Trump, has not ruled out running in private conversations. High-profile city executives — like Mayor Eric Garcetti of Los Angeles, 46, and Mayor Mitch Landrieu of New Orleans, 56, who did a tour of cable shows last week after overseeing the initial removal of Confederate statues from his city — may also consider the race.

Among Democratic governors, Andrew M. Cuomo of New York and Terry McAuliffe of Virginia are seen as especially active in laying groundwork for 2020. Former Gov. Martin O’Malley of Maryland, who ran in 2016, has already returned to early primary states to campaign for Democrats.

Cory Booker will face trouble once his past pro-school choice past is dredged up, O’Malley should just walk away after his dismal performance in the 2016 primaries, and the rest of the field is completely unknown on the national stage. With the exception of Landrieu, most of these names are from bluish to quasi-communist states—but Landrieu is also not well known nationally. He’s part of a Louisiana political dynasty, his sister Mary was a U.S. Senator, but she was defeated in 2014. Are there really zero charismatic and well-known Democratic senators or governors in the party who could be a threat to Trump? Sen. Elizabeth Warren (D-MA), another die-hard anti-Trump Democrat, won’t do well outside of the liberal northeast. The Left has to scrape the bottom of the candidate barrel by asking mayors to run. Let’s also not forget that cities and dense populations centers were thought to be the Democratic lock on national elections. Team Clinton certainly thought so. Now, they’re going to try and dragoon Democrats from these areas and convince Trump voters that the city political machines know their concerns in 2020?

Oh, in case you forgot, Gillibrand was the only senator to oppose James Mattis’s secretary of defense nomination because she’s believes in civilian control of the military. Mattis retired in 2013, but the law states that former military servicemen have to be retired for a period of several years before taking the top spot at the Pentagon, except when Congress affords an exception.