100 Days: If The 2016 Election Were Held Again, Clinton Would Drop Six Points And Trump Would Still Win 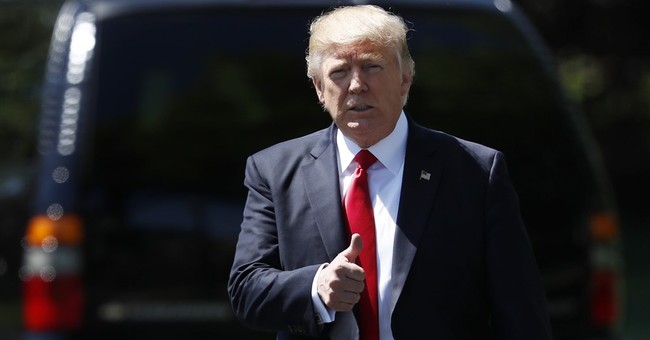 Guy will have a deeper dive on this tomorrow, so I’ll give you a brief preview to the new Washington Post/ ABC News poll, which noted a few things. I’m sure you saw that President Trump has garnered the lowest approval rating for any president in the modern era. Does that mean his base is abandoning him? No. Not even close. They’re still holding strong. Moreover, to pour more salt in Hillary Clinton’s wounds, if the election were held today after Trump’s first 100 days, he would still win, and her support would have dropped six percentage points (via WaPo) [emphasis mine]:

There are no signs of major slippage in support among those who voted for Trump. His approval rating among those who cast ballots for him stands at 94 percent. Among Republicans, it is 84 percent. Asked of those who voted for him whether they regret doing so, 2 percent say they do, while 96 percent say supporting Trump was the right thing to do. When asked if they would vote for him again, 96 percent say they would, which is higher than the 85 percent of Hillary Clinton voters who say they would support her again.

Among Americans who say they voted in the 2016 election, 46 percent say they voted for Hillary Clinton and 43 percent for Trump, very close to the 2-point margin in the actual popular vote results. However, while Trump would retain almost all of his support if the election were held again today (96 percent), fewer of Clinton's supporters say they'd stick with her (85 percent), producing a 40-43 percent Clinton-Trump result in this hypothetical re-do among self-reported 2016 voters.

That's not because former Clinton supporters would now back Trump; only 2 percent of them say they'd do so, similar to the 1 percent of Trump voters who say they'd switch to Clinton. Instead, they're more apt to say they'd vote for a third-party candidate or wouldn't vote.

In a cautionary note to her party, Clinton's 6-point drop in a hypothetical mulligan election relates to views of whether the Democratic Party is in touch with peoples' concerns.Although the sample sizes are small, those who say the party is out of touch are less likely to say they'd support Clinton again, compared with those who see it as in touch.

Still, there's no strong evidence that defectors primarily come from groups that favored Bernie Sanders in the primary. There are no broad differences by age, and liberals are 9 points more likely than moderates and conservatives to stick with Clinton. Similarly, nonwhites are 10 points more likely than whites to say they would not support Clinton again, with more than a third of them heading to the Libertarian candidate, Gary Johnson.

As Streiff noted at RedState, not only would Trump have won again—he also would have won the popular vote.  Can Democrats finally admit that Hillary Clinton was the worst choice to lead the Democratic ticket? She was weak, unlikable, had no message, and the subject of a criminal FBI investigation. It’s more explicit than ever. Look for Guy’s deep dive tomorrow, which I’m sure will go further into the weeds on these points, especially how Democrats are viewed as more out of touch with the concerns of voters than Republicans.

According to the ABC/WP poll, among 2016 voters, @realDonaldTrump would beat Hillary Clinton in a rematch -- in the popular vote, no less. pic.twitter.com/vatpPDlqqh