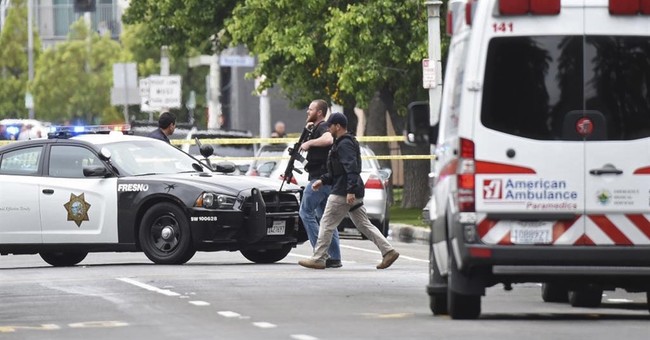 Justin wrote about the horrific shooting in Fresno, California, which left three people dead. The shooter, 39-year-old Kori Ali Muhammad, reportedly yelled “Allahu Akbar” when he was taken into custody by law enforcement, according to Fresno Police Chief Jerry Dyer. Authorities also said that he hates white people. Yet, as reports came in, people on Twitter noticed something odd about the report filed by the Associated Press [emphasis mine]:

A man shot and killed three people on the streets of downtown Fresno on Tuesday, shouting "God is great" in Arabic during at least one of the slayings and later telling police that he hates white people, authorities said.

Kori Ali Muhammad 39, was arrested shortly after the rampage, whose victims were all white, police said. He also was wanted in connection with another killing days earlier, in which a security guard was gunned down at a Fresno motel after responding to a disturbance.

Fresno Police Chief Jerry Dyer said the victims were shot minutes apart in close proximity in areas around downtown. He said Muhammad made other statements to police but he did not disclose them.

The shooting happened outside a Catholic Charities building, but spokeswoman Teresa Dominguez said the charity doesn't believe the suspect was tied to the nonprofit organization.

Are you serious, AP? Even the local ABC News station reported, “Officers were able to find Muhammad and take him into custody. While Muhammad was being arrested, Dyer said he yelled out, ‘Allahu Akbar.’” Why? Well, because that’s what he said. This isn’t the first time political correctness has seeped into the reporting of these attacks.

Katie wrote how the Department of Justice replaced the words “Allah” with “God” in the transcripts of the calls between Pulse Nightclub shooter Omar Mateen and Orlando Police in June of 2016. It also redacted Mateen’s pledge of allegiance to ISIS, though the FBI eventually released the uncensored transcript. Allahpundit, at the time, wrote this:

Loretta Lynch said … that Mateen’s pledge of allegiance would be edited because the government doesn’t want to “further his propaganda.” That might be a reason not to release the audio, since it’s destined to end up in ISIS jihadi porn online, but how does an accurate transcript further Mateen’s propaganda when … ISIS has already claimed credit for the attack? Lynch also claimed that censoring the transcripts was needed to “avoid re-victimizing those people that went through this horror.” I can’t tell if by that she meant that other parts were left out (e.g., if Mateen was heard boasting about his body count) or if she’s referring to the ISIS material. Why would reading a transcript of him pledging allegiance to ISIS “re-victimize” them?

This isn’t Islamophobia. This isn’t up for debate. Mr. Muhammad yelled “Allauh Akbar” as he was arrested. What are you guys afraid of? It’s not like we don’t know this riddle.

Deliberately altering an Islamic terrorist's direct words in order to obscure his motive is how you got Trump. https://t.co/0b8q1YRVlU