WSJ: If The GOP Blinks On This Gorsuch Filibuster, They Might As Well Give Their Majority To The Democrats 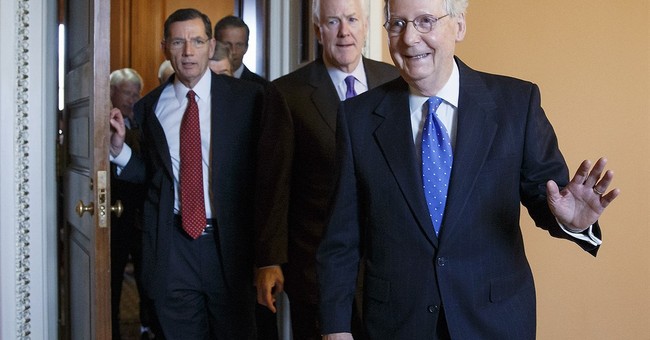 It’s been a rough couple of weeks for the Trump White House. Michael Flynn is a monkey on their backs, the American Health Care Act—the GOP alternative to Obamacare—collapsed in Congress, and those divisions within the GOP that killed health care threaten infrastructure, tax reform, and some other big-ticket items on the Trump agenda. President Trump needs a win and Senate Republicans are trying to do that with Judge Neil Gorsuch. The appellate judge was nominated by Trump to fill the vacancy left by the late Antonin Scalia. Senate Democrats said they supported giving Gorsuch a hearing and a vote. In fact, at least nine Senate Democrats said that, which looked as if the odds of a filibuster were on the horizon, but not something that could potentially become an issue. Some of these senators made these remarks on the Senate floor for the record. Well, it was a ruse. Liberal pressure, coupled with Senate Minority Leader Chuck Schumer’s (D-NY) starting up the block Gorsuch initiative saw those nine back peddle on their initial statements. Sen. Pat Leahy (D-VT), who seemed like a voice of reason, said he wasn’t inclined to support a filibuster, but decided to cave to liberal pressure and vote against cloture. In all, the Democrats have the numbers (43) to block Gorsuch in the first partisan filibuster of a Supreme Court nomination. Only Sen. Angus King (I-ME), who caucuses with the Democrats, remains the only unknown, but even if he supports cloture, Republicans only have 57 votes—three shy of the 60-vote hurdle.

In the meantime, Democrats have done their best to try and cast Gorsuch as a wolf in sheep’s clothing with spectacular ineptitude. There’s not a single media outlet or personality who is serious who thought that Gorsuch did poorly in his confirmation hearings. Even MSNBC, whose sole purpose in life is to keep liberals’ blood pressure at healthy levels, noted that Gorsuch is mainstream and all but knocked the questions hurled at him out of the park. The American Bar Association gave him their highest rating. This is payback for Garland, who was blocked due to the Biden Rule, which isn’t going away—no matter how hard liberals try to say otherwise. Garland is not coming back, liberals. Get used to it. At the same time, if the Democrats try and offer a deal to save the filibuster in the Senate, they should reject it. Moreover, The Wall Street Journal recently said that if they do blink in the face of this filibuster over Gorsuch, they might as well hand over the reins to the Democrats:

House Republicans immolated themselves over health care last week, and now Democrats are hoping the Senate GOP will perform its own kamikaze turn over Supreme Court nominee Neil Gorsuch. If Republicans blink and tolerate Democratic filibusters of High Court nominees, they should hand over their majority to the Democrats now.

But the real radical act is a Supreme Court filibuster. Mr. Schumer wants to use the filibuster to defeat Judge Gorsuch outright, or negotiate a deal that gives the judge a confirmation pass of 60 votes in return for a guarantee that GOP Senators won’t break a filibuster on future nominees during the Trump Presidency.

Either result would do great harm to the Senate’s advice and consent role under the Constitution, tilt the Supreme Court to the left, reward the most partisan voices in the Senate on the left and right, further inflame grassroots conservative outrage against political elites, and deal a grievous wound to the Republican Party. Other than that, a great day at the office.

Start with the fact that there has never been a partisan filibuster of a Supreme Court nominee.

A deal now with Democrats would create a double standard in which GOP nominees are subject to a 60-vote standard but future Democratic nominees aren’t. It would also deny other Senators their constitutional right to offer advice and consent by casting a vote on nominees. A filibuster essentially blocks a vote to confirm, though a nominee like Judge Gorsuch would receive more than 50 votes. He could be denied a seat on the Court on purely procedural grounds, something that has never happened.

If Judge Gorsuch is confirmed, the next opening could come as early as the end of the current Supreme Court term in June and could determine its direction for years. If Democrats know they can block any nominee with a filibuster, they can dictate that no one on Donald Trump’s campaign list of 21 potential nominees can be confirmed.

Democrats could guarantee that no one to the right of Justice Stephen Breyer can be confirmed. This would reward the furthest left Senators for their total resistance, which would in turn empower the most recalcitrant voices in the GOP caucus. Far from empowering moderates, a filibuster deal would reward the likes of Elizabeth Warren and Rand Paul.

If the GOP doesn’t want to squander its Senate majority, it will stay united and confirm Neil Gorsuch, even if it means breaking an unprecedented Senate filibuster.

The publication also noted another simple fact: McConnell, by invoking the Biden rule, held the line on the Supreme Court. It’s a move that undoubtedly helped Donald Trump win the election. Twenty-one percent of the electorate went to the polls, with SCOTUS as one of their motivating reasons to vote on November 8—and they broke for Trump 56/41 over Clinton. If Senate Republicans entertain any deal from Democrats over the pending nuclear option being invoked, then they’re just ignoring the voters of their own party. That’s unforgivable. Moreover, we get nothing in return. Democrats need to understand what they have smugly said our way for the past eight years: elections have consequences. Yes, they do. And you’re about to learn that by the end of this week when we steamroll you to confirm Gorsuch.