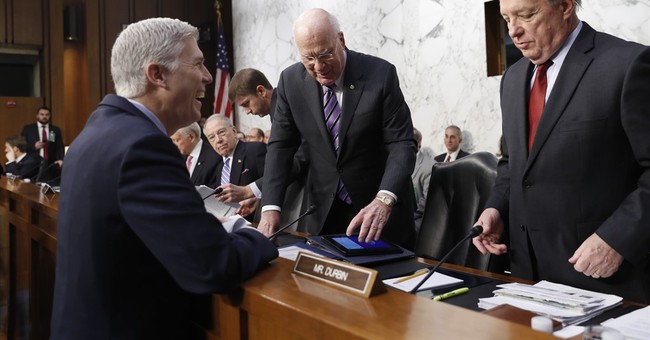 UPDATE: Off to the nuclear showdown, with Sen. Chris Coons (D-DE) saying he supports blocking Gorsuch.

.@ChrisCoons is a NO on cloture. That's 41 Democrats. Nuclear option here we come.

As the Senate Judiciary Committee has their vote on Judge Neil Gorsuch’s Supreme Court nomination, it looks like we’re heading for nuclear war. Sens. Pat Leahy (D-VT) and Mark Warner (D-VA) said they would support blocking the highly qualified jurist, despite the former saying that he wasn’t inclined to support a filibuster. Leahy said that, but also noted that it doesn’t mean he supports putting Gorsuch on the Court. On the other hand, Sen. Michael Bennet (D-CO) said that he wouldn’t be jumping into Sen. Chuck Schumer’s block Gorsuch clown car. Democrats King (I-ME) and Coons (D-DE) are the only ones who have declared where they stand on Gorsuch, but Ace of Spades Decision Desk has the “no” count at 42, all Democrats.

Guy wrote earlier this morning how Senate Majority Leader Mitch McConnell (R-KY) said that Gorsuch is going to be confirmed. How that happens is all up to the Democratic Party—and how much damage they want to inflict upon the country.

Cortney wrote about how CNN’s Chris Cuomo asked Sen. Richard Blumenthal (D-CT) why isn’t his party keeping his powder dry over a second vacancy? Sen. Claire McCaskill (D-MO) had the same concerns until she decided to support the filibuster.

& with @MarkWarner saying he’ll oppose gorsuch, looks like we are heading to the nuclear option

That makes 4 Democrats who have decided not to filibuster Gorsuch; 4 more votes needed to get 60 on cloture