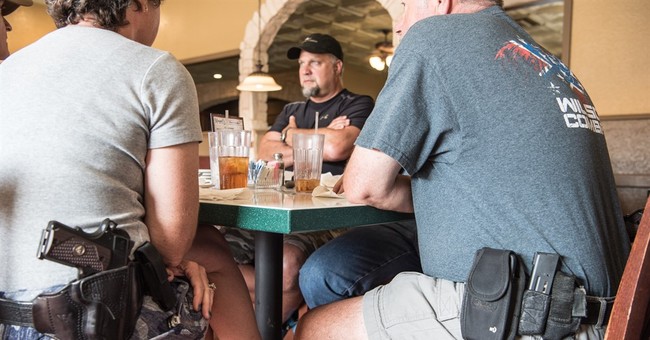 On August 1, 2017, North Dakota will become the 13th state that adopts constitutional carry. After the State Senate passed the measure on March 21 in a 34-13 vote, Gov. Doug Burgum signed the bill into law on March 23—making it official that the state will join the small but growing club of states that allow law-abiding gun owners to carry their firearms without a permit. You still have to undergo a background check to lawfully own firearms and if you’re carrying, you need to inform law enforcement if approached:

The “constitutional carry” authority provided under House Bill 1169 applies only within North Dakota’s borders. Those wanting concealed carry reciprocity with other states must apply for a Class 1 or Class 2 North Dakota concealed weapon license, for which the requirements remain unchanged.

Current law only requires an applicant for a Class 2 license to complete an open-book test, at a cost of up to $50, and undergo a criminal history records check. Class 1 licenses require firearms training and additional requirements. Both licenses carry a $60 application fee.

Under HB 1169, anyone who is eligible to possess a Class 2 firearm license and has had a valid driver’s license or state ID card for at least a year may carry a concealed firearm. Law enforcement officials recommended the state ID language, as well as the bill’s requirement that anyone carrying a concealed weapon inform law enforcement of the weapon during a traffic stop or other contact.

It’s not just a red state phenomenon either. Vermont, which is represented in Congress by self-described democratic socialist Bernie Sanders (I-VT), is a constitutional carry state. In fact, close between 70-75 percent of Vermont residents own a firearm. It’s not the Wild West up there. Constitutional carry legislation is also being considered in Texas (Fort Worth Star-Telegram):

State Rep. Jonathan Stickland, R-Bedford, said this measure known as Constitutional Carry would once and for all fully restore Texans’ Second Amendment rights.

“This is a big day for many Texans,” said Stickland, who authored the bill more than a dozen lawmakers have signed on to, including state Reps. Matt Krause, R-Fort Worth, Tony Tinderholt, R-Arlington, and Bill Zedler, R-Arlington. “Texans are sick of big government. They are sick of wondering if their rights are always disappearing.”

But it’s unclear how far the proposal will fare in the House or the Senate. It faces numerous hurdles before it would become law.

More than 320 people signed up to weigh in on the issue before the House Homeland Security and Public Safety Committee and more than 75,000 petitions supporting the measure were presented.