Congress After Dark: Here Are The Changes To The GOP's Obamacare Replacement Plan 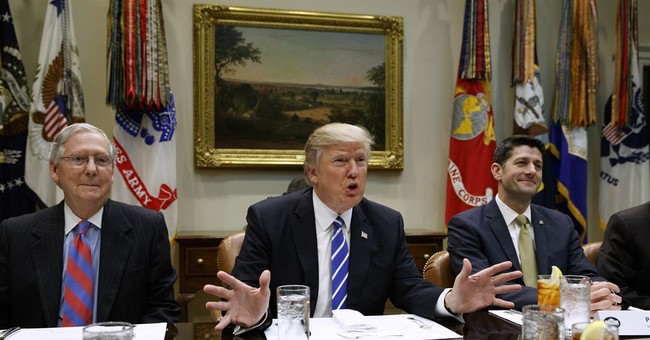 With the GOP health care bill on life support, the changes to the bill to shore up Republican support were unveiled late last night. It’s not a secret that conservatives are furious about the American Health Care Act. They’ve waited several years for the GOP to draft a replacement bill and repeal Obamacare, only to have Republicans keep Medicaid expansion intact—one of the law’s most expensive provisions—in their new bill. It also did nothing to curb skyrocketing premiums. It’s been derided as Obamacare lite, which isn’t necessarily inaccurate. As Speaker Paul Ryan conceded that changes needed to be made for passage, one area that President Trump seemed to warm up to was the Republican Study Committee’s proposed amendment to add work requirements to able-bodied Medicaid recipients, though on a state-by-state basis. The other involved placing a cap on new Medicaid enrollments by 2018 instead of 2020. Over the weekend, House Majority Whip Steve Scalise (R-LA) said that two members of the Freedom Caucus would vote for the bill, one of which is Rep. Gary Palmer (R-AL) who voted against the bill in committee. The change to Medicaid funding (block grant proposal) was a tipping point. Regardless, the tweaks seem to be winning back support on the Hill, with moderate Republicans starting to warm up to the changes. The Congressional Budget Office score on the AHCA had sent moderates running for the bunker. While Ryan admitted that changes were required, he was initially cryptic about how that would manifest itself in the bill. The Washington Post has more, though there is still a lot of resistance to the legislation from both sides of the aisle

Some of the changes unveiled Monday were made to placate conservatives, such as accelerating the expiration of the ACA’s taxes and further restricting the federal Medicaid program. But a major push was made to win moderate votes, including a maneuver that House leaders said would allow the Senate to beef up tax credits for older Americans who could see major increases in premiums under the GOP plan.

There were signs Monday that the bill had growing support among the moderate wing of the House GOP. Rep. Tom MacArthur (R-N.J.), who had voted against the leadership in an early procedural vote on the health-care legislation, said that he was “satisfied enough that I will support the bill.”

MacArthur said he was assured that the bill would do more for older and disabled Americans covered under Medicaid and that an additional $85 billion in aid would be directed to those between ages 50 and 65.

“That’s a $150 billion change in this bill to help the poor and those who are up in years,” he said.

Several House Republicans from Upstate New York won an amendment that would allow counties in their state to keep hundreds of millions of dollars of local tax revenue that they forward to the state government to fund its Medicaid program. One member, Rep. Claudia Tenney (R-N.Y.), told the Syracuse Post-Standard on Monday that her support of the bill was conditioned on the amendment’s inclusion.

Opponents of the bill — Republicans and Democrats alike — called the deal a sordid giveaway on social media networks Monday night. Many compared it to the state-specific deals that were cut to pass the Affordable Care Act in 2009 and 2010 and panned by Republicans — such as the Medicaid reimbursement boost that then-Sen. Ben Nelson (D-Neb.) secured for his home state that Republicans mocked as the “Cornhusker Kickback.”

Axios had a simple breakdown of the tweaks to the bill:

The House plans to vote on the ACHA this Thursday. As Forbes’ Avik Roy noted, the three-phase approach the GOP is taking with health care is probably going to fail. Reconciliation only needs simple majorities to pass, but the regulations that are most responsible for rising premiums have to be excluded from the bill. They’re not explicitly part of the budgetary process within the federal government. And if you think Democrats will help us on anything regarding heath care, even getting a bill that allows health care companies to compete across state lines, you’re nuts. They’re not going to help, which is why phase two and three of this legislative agenda is doomed to fail. For every other tweak we want to make post-reconciliation, if we ever get that far, we’ll need 60-votes in the Senate to invoke cloture and that isn’t going to happen. There’s also battling the ongoing narrative that the GOP is taking away people’s health care, we want people to die etc., which doesn’t bode well for constituent relations. Roy has noted that the time for a clean repeal without political consequences was back in 2012. We lost that election, though that didn’t stop some GOP senators from vowing to take on Obamacare during the 2014 midterms. Well, some are now walking a rather waffled line on that front.