Can Religious Liberty Bring The White House And Never Trumpers Together? Well, They Had A Meeting About It 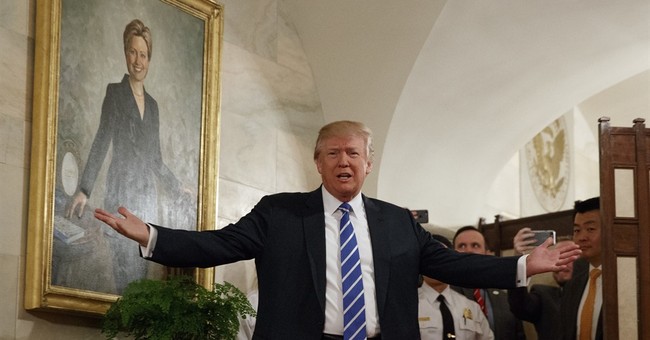 Is there anything Never Trumpers can work on with the president? That was a question Dr. Jay Richards of the Stream, a publication that’s dedicated to smaller government and human freedom, was thinking about around the time the 2016 cycle was entering its final stages. It’s not an illegitimate question. Hillary Clinton ‘s support had started to plateau and Donald Trump would go on to become the candidate where all the energy and momentum would flow, especially when he discussed the economy and trade. Yet, Richards, along with at least 20 other Never Trumpers, probably thought that this man could be the next president of the United States. He would never be a champion of traditional marriage, but he surely believed in religious freedom. That was the hook. It was actually a better fit as well. Religious freedom has more cross appeal, its popular, and it doesn’t carry the fire and brimstone elements that traditional marriage advocacy at times can bring to the table. Townhall was able to speak with Richards about this meeting and what religious liberty initiatives he wants to see emanating from the Trump White House.

After years of being under attack by the Obama White House, Trump was the best shot for evangelical Christian and conservative Catholics to have a chance at pushing back against the executive orders on transgender bathrooms. It’s a fight that’s made strange bedfellows of the Left and Right. Radical feminists have partnered with conservative groups in fighting the transgender executive order on public school restrooms issues by the Obama administration. Trump recently rolled that order back. Richards said that for feminists, they understand that there is something inherently unique about being a woman. There are traits and characteristics that are specific to that gender, whereas transgenderism is more or less someone simply thinking that they’re born in the wrong body. That’s not the same thing. In some aspects, feminist groups may see the trans rights movement as pushing for the erasure of the lines that make the feminist movement unique to women.

In this fight, the religious community saw the transgender bill as another threat to religious liberty due to the inevitable lawsuit that religious institutions adhere to the same standard outlined in the now defunct Obama executive order. Richards said that what evangelicals want is a new Religious Freedom Restoration Act (RFRA) on steroids. Something that can ensure business and citizens won’t be sued into poverty from the agents of the progressive Left.

Hence, the First Amendment Defense Act (FADA) that Richards says would reiterate the free exercise of religion and give it legal status in the courts, so people with deeply held beliefs, concerning marriage and sexual relations that are associated that institution, are not compelled to participate in activities or ventures that would violate their articles of faith. That’s the end game. What Richards says that Trump should issue an executive order in the spirit of FADA as a buffer to get the ball rolling, which brings us to the meeting in Trump Tower.

Richards knew that religious freedom could be the issue that could bring the two camps together. Evangelicals saw that a lot of solid conservatives were in Trump’s orbit of advisers. In September of 2016, Trump sat down with 25 of the leading (and mostly) Never Trump leaders in the country. He wasn’t there to rip them about their opposition to his candidacy. He was here to listen, which he did—going around to each person sitting at his marble table in the conference room. It was a compromise. Trump isn’t going to lead the charge against same-sex marriage, but the overall issue of religious liberty could become the bridge between these two camps. Yet, there are obstacles.

First, if the evangelical community somewhat compromises on the issue of traditional marriage, does that mean the conservative Christian community has come to terms that gay marriage is here to stay in the same fashion that liberals have to know that their gun control advocacy is going nowhere? Richards disagrees with that premise.

He told Townhall that traditional marriage advocacy would never go away because the government federalized the issue, and that this dialogue shouldn’t be viewed as a means to suggest that same-sex marriage is here to stay. While Richards also noted that a happy medium could be struck between a set of strong religious freedom laws and same sex marriage provisions, the Obergefell decision is going to have to be challenged. A new ruling is needed to modify the language since the landmark 2015 decision, which ruled that gay marriage is a fundamental right through the 14th Amendment, is written in a way that suggests that any American who believes in traditional marriage is bigoted. Without legal action to modify Obergefell, the Left would slam any religious freedom bill, as they would frame it within the context that it’s a license to discriminate. Yet, shouldn’t RFRA be enough?

The law, which was signed by President Bill Clinton, partially has its roots concerning peyote use within the Native American spiritual life. Yet, why doesn’t that apply to a wedding baker? Richards feels that progressive bias within the court system is at fault. As Townhall told him, the courts, even in states with RFRA statutes, have rarely, if ever, granted exemptions to business owners operating in the wedding industry from participating in a ceremony that went against their beliefs. Richards acknowledged that and noted that there’s a disconnect between smoking peyote and sexual identity, when both fall under that same statute regarding honoring a compelling government interest and ensuring that deeply held beliefs are not trampled on by the government. The same intellectual principles are not being applied. Richards is hopeful President Trump can offer clarity and legal protections to these communities, who he says will reward him politically if he follows through. We have seen the consequences in elections concerning swings with religious voting blocs. In June of 2016, Trump had a 29-point deficit with Catholics; he ended up winning 52 percent of the Catholic vote come Election Day. The ball is in his court now. And going by what he’s done so far, it looks like he’ll honor his commitment. But this is Washington. Anything can happen for better or worse.