Clinton Pal Terry McAuliffe Says He Might Run In 2020 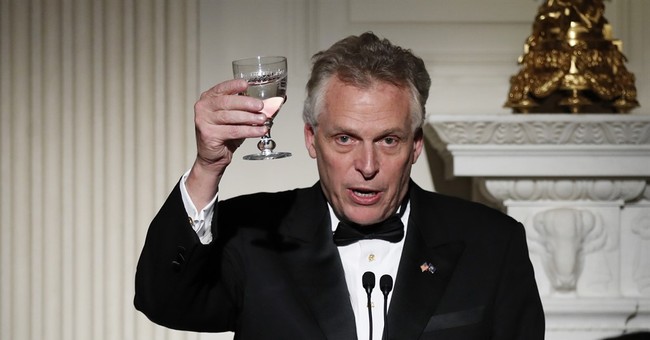 It’s not the subject of The New York Times’ piece. It’s not even given a prominent spot in the article, but it seems Virginia Democratic Governor and Clinton pal Terry McAuliffe might be mulling a run for the White House in 2020. The man has access to cash, ran a state, he’s popular, and worked well with state Republicans on economic development issues.

On the Second Amendment, he took a different path than Attorney General Mark Herring, who gutted the state’s concealed carry reciprocity laws in December of 2015. He worked with Republicans and ushered in a deal that restored those agreements. It also removed the attorney general from being involved in the process of reciprocity concerning concealed carry permits, thus Virginia now recognizes any valid out-of-state concealed carry permit. Yet, the Virginia State Police warn that not all states may recognize Virginia holders even with this new law. Georgia, for example, still doesn’t recognize Virginia CCW holders.

Say what you will about Texas, Virginia has better gun laws because of Terry McAuliffe working with Virginia Republicans. I didn’t vote for him. I certainly won’t be backing him should he run for president, but on this contentious issue—he and the state legislature deserve a hat tip. Yes, last year the Old Dominion faced a budget shortfall of $1.5 billion, but that didn’t stop New Jersey’s Chris Christie from running for president last year and the Garden State is a hellhole for business. Putting on liberal goggles (which also requires drinking copious amounts of whiskey) I can see where there may be a spot for him in three years. It’s not like the Democrats have any heavyweights, like Clinton and Obama, left to run against Trump. There’s a case. It's not a good one, but I don't think it'll be received like Ralph Nader’s 2004 run, where almost every Democrat was saying “not this guy again,” or Dennis Kucinich’s 2008 campaign, whose kookiness was seen during the Democratic debates where he admitted to seeing a UFO.

Economic development will be the linchpin of McAuliffe’s legacy and it’s an issue that Democrats need to pounce on to reconnect with working class white voters if they want to retake Congress and the presidency. Yet, it appears that it all depends on Virginia’s 2017 gubernatorial election. McAuliffe is barred from running for another term—Virginia prohibits consecutive terms—with fellow Democrats Lt. Gov. Ralph Northam and former Rep. Tom Perriello now duking it out in a primary [emphasis mine]:

Mr. McAuliffe broached the matter of the Virginia primary in a White House meeting with Mr. Obama shortly after Mr. Perriello entered the race, and Mr. Obama was noncommittal, according to a Democratic strategist briefed on the conversation. Asked if Mr. Obama would wade into the race, his spokesman, Eric Schultz, said only that he would not rule it out.

But Mr. McAuliffe said there was “zero chance” the former president would intervene, and some of Mr. Obama’s advisers said privately that they doubt he would endorse Mr. Perriello.

In an interview in his office, now festooned with a “Make Virginia Great Again” cap, Mr. McAuliffe rather unconvincingly insisted that he was not irritated by Mr. Perriello’s bid. But the insurgent candidacy has upended the governor’s well-laid succession plans, potentially complicating a presidential run he is increasingly thought to be eyeing. (Asked if he wanted to be president, Mr. McAuliffe said, “I don’t know, I might.”)

Right now, Perriello is trying a new tactic to win over liberal Virginia voters: bash Trump and make the case that Virginia will be a southern firewall against his administration. Northam had this pretty much locked up, with McAuliffe getting the top Democratic dogs to back his LG, but Hillary Clinton’s upset loss saw Perriello toss his hat into the ring. In all, it’s something of a clown show. Perriello is trying to cast himself as a hard core progressive, though he got the endorsement of the NRA and voted for an Obamacare amendment that would bar health insurance companies in the exchanges from covering abortions. As for Northam, well—he voted for George W. Bush twice. So, concerning the firewall, and even with Democrats winning, there seems to be a lot to not really like in these two men if you are a fiery progressive.