Poll: Majority of Americans Say Media Is 'Too Critical' of Trump 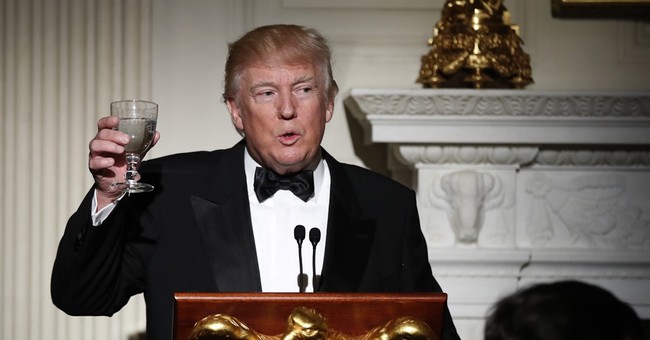 President Donald J. Trump has had a rough couple of weeks. The resignation of Michael Flynn, his now former national security adviser, put the intrigue about Russian ties on steroids and the federal courts have blocked the travel moratorium provision in his executive order on immigration. His approval ratings a low, but he holds a 55 percent approval with “the critical middle.” Voters who voted third party, didn’t vote at all, or supported him to defeat Hillary Clinton. Truth be told, given the media’s antipathy towards the president, any Trump voter should have expected that a) everything he would do would be translated as a disaster in the liberal news media; and b) because the liberal news media views Trump as Satan incarnate—liberal America was going to go indiscriminately insane over everything he did. Not saying that this wouldn’t have happened without the Democrat media complex, but they sure do know how to fan the flames.

So, it could come as n surprise that a recent WSJ/NBC News poll has found that a majority of Americans find that the news media has been “too critical” of Donald Trump. Also, there was a huge spike in those who said that America is heading in the right direction. In July, that number hovered around 18 percent. It’s now 40 percent. That’s a 30+-point spike:

The poll suggested that the public may be sympathetic to some of Mr. Trump’s recent attacks on the media. A majority of adults, 51%, said the media has been too critical of the president, while 41% said the press has been fair and objective.

Aiding Mr. Trump’s approval rating was the fact that Americans are slowly becoming more optimistic about the country and the economy. Asked about the course of the country, 40% said the nation is headed in the right direction. That is up from 33% in December, and 18% in July.

A plurality of Americans, 41%, continue to believe that the U.S. economy will improve, a postelection shift that followed three years in which most Americans expected economic prospects to remain stagnant. Among those who are anticipating improvement, 73% credit the expected gains mostly to Mr. Trump’s policies, while 20% say it would result from the normal ebb and flow of the business cycle.

Some 60% of Americans now say they’re hopeful and optimistic about the future of the country, up 4 percentage points from December. Just 40% are worried and pessimistic, slightly lower than in other recent Journal/NBC News polls.

Trump is not your typical president, so the polls will be a something of a checkered report card. Yes, his approval rating isn’t good. It’s around 44 percent, but he’s holding steady with centrist voters. Almost 75 percent of the country feels that any improvement in the economy will be because of Trump’s policies, more people think we’re on the right direction, and more Americans are optimistic about our future under Trump. That being said, if he keeps his promises, especially on job creation and trade—the president should have solid footing going into 2018 and 2020. Keeping his promises and doing exactly what he said he would do on the 2016 campaign trail is the reason why his supporters aren’t leaving him.

Hugh Hewitt noted the tangible wins Trump can earn the GOP over infrastructure spending, allowing the money to be given to local municipalities who then decide how that money is spent while working with the local builders and trade unions. That’s an easy win—and something visible that he can point to in the campaigns to come.