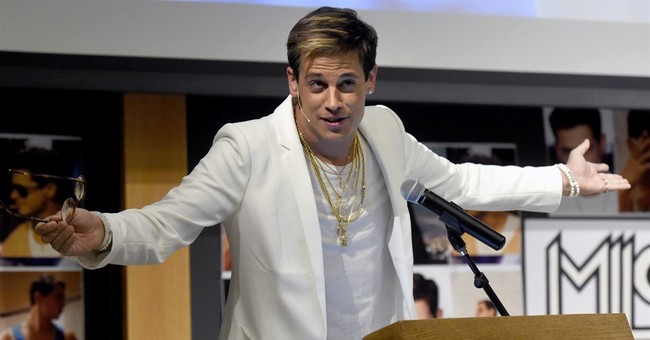 UPDATE: Milo has resigned from Breitbart.

Well, it looks like all is not well at Breitbart, as two sources, one of them a senior editor, have come forward to say that a half-dozen employees are threatening to leave the publication if senior editor Milo Yiannopoulos isn’t fired for his controversial remarks that seem to justify pederasty. These remarks led to his invitation to be the keynote speaker at the American Conservative Union’s annual Conservative Political Action Conference to be scrapped and his book deal with Simon and Schuster to be canceled.

Guy offered an excellent recap of the clip from the podcast featuring Yiannopoulos that led to this firestorm in his post on the matter yesterday:

Milo defended himself on Facebook, condemning pedophilia and saying that the current "furore" is attributable to selective editing, unfair distortions, and his own "sloppy" verbiage in the offending conversation. I encourage you to read it and draw your own conclusions. I'd only note that in the extended clip, Milo bemoans the "arbitrary and oppressive" notion of sexual consent, and makes an amoral case that there's a meaningful distinction between "pedophilia" and sexual conduct with post-pubescent underage children as young as 13. Despite the ages he cites in his Facebook post (16 and 17), he mentions the age of 13 at least three times in the longer clip, including a hypothetical example of sex between a 28-year-old adult and a 13-year-old child. "These things do happen, perfectly consensually," he asserts. Milo can parse and spin until he's blue in the face -- and some of the points he makes are worthy of consideration and even empathy -- but he did mount a public justification of pederasty, which understandably proved to be a bridge too far for the higher-ups at CPAC.

Now, the Washingtonian’s Elania Plott says that an exodus could be brewing:

A senior editor at the right-wing publication tells Washingtonian that “at least a half-dozen” employees are prepared to leave the company if Milo Yiannopoulos is not promptly fired. A second Breitbart source confirms this estimate.

The fact of the matter is that there’s been so many things that have been objectionable about Milo over the last couple of years, quite frankly. This is something far more sinister,” the senior editor says. “If the company isn’t willing to act, there are at least half a dozen people who are willing to walk out over it.”

The last time there was an exodus of this magnitude was last year over the kerfuffle between former Breitbart reporter Michelle Fields and then-Trump campaign manager Corey Lewandowski. The incident occurred on March 8, 2016 in Jupiter, Florida after a Trump press conference. Lewandowski is reported to have grabbed Fields arm in a violent manner while she was trying to ask then-candidate Trump a question. Fields eventually filed charges against Lewandowski, which were not pursued by the Palm Beach County state attorney. During the course of this story, leaked internal messages appear to have showed Breitbart editor Joel Pollak instructing staffers not to defend Fields publicly. This led to editor-at-large Ben Shapiro, Fields, spokesman Kurt Bardella, associate editor Jarrett Stepman, and national security correspondent Jordan Schachtel resigning from the publication.