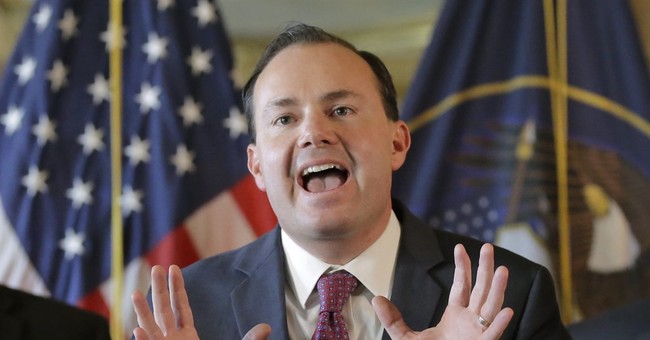 The 2016 election is over. Donald J. Trump is now president. Yet, he’s not a conservative Republican.The man is a right-leaning populist. He’s open to government-funded childcare, he wants a health care program that covers everyone, he’s not a free trade advocate, and he’s not afraid of infrastructure spending.

Conservative commentator Hugh Hewitt discussed ways how Trump populism and conservatism could meet in the middle and produce tangible wins to campaign on for the 2018 and 2020 elections. For starters, allow the infrastructure spending to be allocated to the local municipalities so they can spend it on whatever is necessary for their respective communities. Hewitt added that Trump has known these people for decades. Both of these parties know how to build things.

On taxes, Hewitt noted that the wealthy don’t want a tax cut, but they do want simplification. Concerning tax cuts, give most of it to the middle class, which is where Sen. Mike Lee (R-UT) comes into the discussion. The Tea Party insurgent, who came to Washington in 2010, has argued that his party needs to reconnect with the “forgotten man.” In a speech to the Heritage Foundation on Wednesday, Lee said, “Four years ago, I first came to the Heritage Foundation and urged conservatives to reconnect with the working families and struggling communities our party had too long ignored. And I spent the bulk of my first term in the Senate advocating for policy reforms to help and empower the “Forgotten Americans” that Washington’s broken status quo was leaving behind.”

Lee also admitted that conservatism’s somewhat slow response to the needs of working people is rooted in the movement’s greatest weakness, which is “its difficulty realizing when societal problems can and should be addressed through public policy.” The senator also acknowledged that globalization as a force ultimately leaves American workers behind. Lee noted that reforming our insane tax code is a way to make globalization work for the American worker and push us towards a principled conservative and populist agenda. Below are excerpts from his address:

The temptation – both on the Right and Left – is to try to resist those natural forces [globalization]. But public policy cannot pick a fight with human nature and hope to win. The Wright Brothers did not fight the laws of gravity and aerodynamics to fly – they used them. In the same way, whenever we can, policymakers should embrace human nature and harness it to society’s ends. The way to put Americans First is not to fight against the global economy, but to put it to work for American workers.

A simple but powerful two-step federal tax reform would go a long way toward accomplishing this goal.

First, we should eliminate the federal corporate tax altogether. And then we should raise the rates on investment income – dividends and capital gains – to treat it like ordinary income.

This would accomplish three things.

First, it would liberate the workers’ share of the corporate tax. Economists differ on the precise ratio, but the consensus is that lost wages make up between one-quarter and one-half – or sometimes more - of corporate tax revenue. Whatever the proportion, we know that eliminating workers’ share of that tax would redirect billions of dollars from the IRS into workers’ paychecks, in every industry across the country.

Second, it would level the playing field between American workers and American investors. In a pre-global, national economy, it made sense for the federal government to tax investment income at special low rates, on the logical assumption that dividends and capital gains would be reinvested somewhere in the United States. But in a global economy, where American investors’ best returns might be found on the other side of the world, that logic no longer holds. Globalization has been disproportionately beneficial to American investors compared to American workers. The tax code should not unfairly compound that inequity.

And third, and perhaps most importantly, this new tax framework would actually tilt the playing field in the global economy in favor of the United States. Rather than compete against foreign tax havens, the United States would become the world’s tax haven. For foreign investors, this tax reform would be an offer they couldn’t refuse: zero tax on profits produced by American-based companies and jobs.

And even for American investors, this framework would offer a better deal than they could get anywhere else. Today, the United States’ 35 percent corporate tax rate, 20 percent rate on capital gains and dividends, and the 3.8 percent Medicare surtax add up to a 50 percent real top federal tax rate on investment income. After eliminating the corporate tax, we could raise tax rates on capital gains and dividends all the way up to the current top labor income rate of 39.6 percent, and investors could still come out ahead – so long as they invest in the United States.

Wealthy Americans would still be free to send their capital abroad. They would just have to start paying the same tax rates all other Americans pay. No more would they receive preferential incentives to create jobs in other countries.

Concerning trade policies, Lee said that we should have a zero corporate rate, which would, shocker, create a better job creating and investing climate for businesses and benefit workers. Concerning immigration, the Utah senator mentioned that the influx of low-skill labor is killing Americans working class. It’s one of the reasons why organized labor—unlike the rest of their liberal allies—have typically been against illegal immigration, as they reduce costs to the point where various job bids from their fellow unionized affiliates are lost. At the same time, business conservatives like the reduction in the overhead, which pits them against the emerging populist wing of the GOP. It’s a basic overview, but one that shows that there are factions within both the conservative and liberal movements that have made progress towards reform a tortuous one.

There’s a new sheriff in town with Donald Trump. And while the new raids that have rounded up close to 700 illegal aliens over the past few days had its roots in the Obama administration—it’s a taste of what is to come concerning enforcement. For starters, Trump promised to boot criminal illegal aliens, 75 percent of those arrested had criminal records. This isn't a controversial position

Lee also mentioned a reform with legal immigration from Sen. Tom Cotton (R-AR), which limits it to only nuclear and not extended families. Also, focus on high-skilled labor from immigrant groups to help build an economy for the 21st century. In short, this aspect is a rehashing of the Barbara Jordan commission’s recommendations on immigration reform from the Clinton administration, where she emphasized that there should be a reduction in legal immigration by one third, and a shift towards high-skill labor. If Jordan, a Black Democrat, who passed away in 1996, said this today—she would have been chewed up and spit out by the progressive attack machine.

Tax reform at home and a return to enforcing our immigration laws appear to be the first salvos some Republicans want to take concerning protecting the forgotten Americans that ushered in the Trump era. And it’s not an insane proposal.