NYT Begs One More Republican To Sink DeVos, Warren Says Betsy Is Being Rammed Down Our Throats 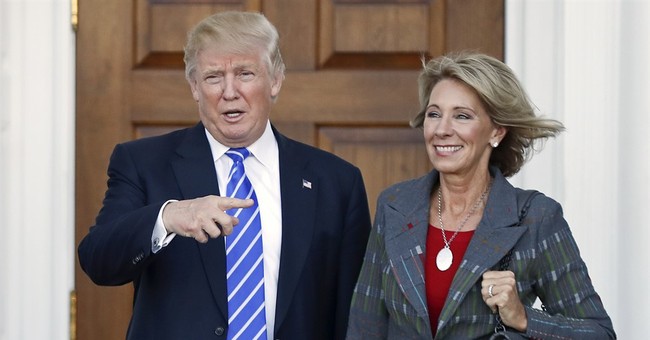 Sen. Jeff Sessions (R-AL), who is also President Trump’s attorney general nominee, plans on voting for Betsy DeVos for education secretary prior to him being confirmed as our next attorney general. After weeks in limbo, Sessions was able to clear the Senate Judiciary Committee for a final confirmation vote. When Sens. Lisa Murkowski (R-AK) and Susan Collins (R-ME) broke ranks to announce their intention to vote against DeVos, they messed up the vote schedule and DeVos was bumped up, so the Alabama senator could cast his vote. It’s a 50-50 split, with Vice President Pence expected to break the tie. It’ll be the first time a sitting vice president did so for a cabinet nominee.

Progressive stalwart Elizabeth Warren (D-MA) is not happy, claiming that Sessions’ vote for DeVos is a conflict of interest, and that the GOP is ramming this nominee down our throats. Yeah, sort of like how the Democrats rammed through Obamacare? Doesn’t feel so good now, huh?

"I rise today to call on my colleagues to reject the nomination of Betsy DeVos," Warren said from the Senate floor. "The Republicans have made it clear no matter her experience, no matter her radical views ... they will ram this nomination down the throats of the American people sideways."

Warren added that "it is difficult to imagine a worse choice" to head up the department.

Warren argued on Monday that Sen. Jeff Sessions (R-Ala.), Trump's pick to be attorney general, shouldn't be allowed to vote, arguing it is a "massive conflict of interest."

"Now with at least 50 senators ... publicly opposed to this nomination, the Republican leadership has rigged the vote so that Sen. Sessions can drag her across the finish line just before he is confirmed as attorney general," she said.

As Cortney wrote, Democratic haranguing will continue throughout the night. Over at The New York Times, the liberal publication’s editorial board pleaded for one more Republican to break ranks and kill the nomination for good last Thursday. They also railed against Mnuchin and Price as well, while warning us that DeVos will be the end of education. Yeah—I don’t think the call to arms will be heard. Why? Because The New York Times says that about every Republican—They’re awful, they’re unqualified, they’re extreme, they’re a threat to our republic. The gimmick has run out of gas and by noon tomorrow—Betsy DeVos will be our next education secretary.

This country needs a few good Republicans — one more would do — to rescue it from Betsy DeVos, one of President Trump’s worst cabinet choices and his pick to run the Department of Education.

The vote to confirm Ms. DeVos is expected as soon as Monday, and the Republican senators Lisa Murkowski of Alaska and Susan Collins of Maine now say they’ll vote against her, citing hundreds of calls they’ve received from furious voters. The result would be a tie that Vice President Mike Pence would break in Ms. DeVos’s favor. The extra Republican vote could come from one of several independent-minded senators; one candidate is Lamar Alexander, an expert on public schools who actually owes the country a good turn because of his failure as chairman of the committee vetting Ms. DeVos to question her closely and to give more time to her critics.

The Senate’s constitutional duty to “advise and consent” on presidential nominations was intended by the founders to counter the wrong-headed populist impulses of the House. Voters should remind Republican senators that if they surrender to Mr. Trump on appointees so clearly unfit, they will be relinquishing a historic obligation and tarnishing themselves.