Schumer: We Will Only Work With Trump If He 'Abandons Republicans' 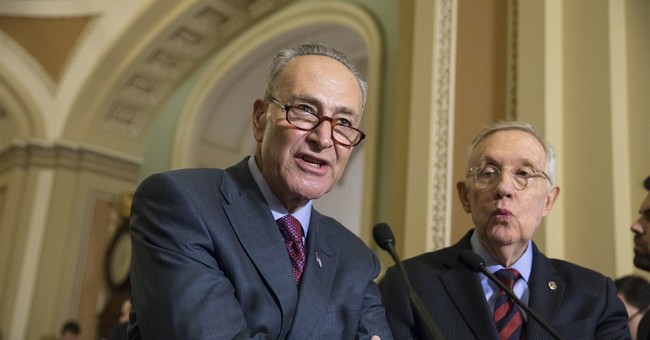 Last week was a bit interesting from the Senate Democrat side. The olive branch that was offered by Sen. Chuck Schumer (D-NY), the new Senate Minority Leader, was blunt and straightforward to the incoming Trump White House. We’ll only work with you if you abandon the Republicans and adhere to 100 percent of what we want to do (via Real Clear Politics/CNN):

CHUCK SCHUMER: I said, Mr. President-elect, you went after both the Democratic and Republican establishments when you ran. You were an anti-establishment change candidate. But by your cabinet picks and your early pronouncements, you seem to be embracing your timeworn, shop-worn hard right.

BASH: What did he say?

But I said to him, if you do that, your presidency will not come close to being a success.

BASH (voice-over): For Schumer, success will be even more complicated, a fine line between when to work with Trump and when not to.

SCHUMER: The only way we're going to work with him is if he moves completely in our direction and abandons his Republican colleagues. Ninety, 95 percent of the time, we'll be holding his feet to the fire and holding him accountable. But we're Democrats. We're not going to just oppose things to oppose them.

BASH: I've known you for a long time. You love a deal, not unlike the president-elect. I find that hard to believe, that you don't want to make deals with him.

SCHUMER: Well, here's the problem. The Republicans in the Senate and the House have been run by a hard right group, an almost Tea Party group. And they are so far away from where we are...

BASH: But now they've got a deal maker in the White House, just like you.

SCHUMER: Well, look, we're going to look at the specifics of what is proposed. Of course I'd like to make a deal.

Schumer also said that the Senate Democrats would fight to the death if President-elect Donald Trump nominated someone who isn’t “mainstream” to the Supreme Court. And by not “mainstream,” they of course mean conservative. A Samuel Alito-type candidate, who is eminently qualified to serve as our nation’s next jurist, would be trouble. Even a John Roberts clone would be problematic.

In other words, the Democrats are still mad that Trump won. They’re mad that Russia ran a concerted and coordinated propaganda effort to influence our election, though there no evidence to suggest that it had any impact whatsoever. They’re just a miserable whiny group of people right now. They don’t know how to respond since they probably never imagined this moment: Clinton in permanent retirement, Obama out, and their party in shambles. So, how to avoid exacerbating the headache liberals on the Hill have at present? Well, don’t anger their base; the progressive, snobby, and insufferable elites that infest our nation’s cities. They’re mad too—and remember, they’re pretty much demanding that Democrats do all that they can to stop Trump because he’s Hitler [or insert any authoritarian leader here]—or something.

Also, if you’re shocked that Democrats are thinking and acting as if they won the election, you’re not dreaming. They actually think that—and Schumer’s fighting words encapsulate it. Disregarding basic Americans civics, they feel that because Clinton won more popular votes, though not the majority, that they won the election. Right, and if Texas’ election laws allowed two Republicans, who would probably be the top two-vote getters, run for the same senate seat, then I’m sure we would be closer to a dead heat in the popular vote. Alas, that didn’t happen. And it's irrelevant. Trump won the majority in 30 states to clinch 304 electoral votes.

On infrastructure, defense spending, and maybe childcare—there could be areas for the Trump White House to work with Schumer. The latter especially is going to put Trump on a collision course with Republicans, though the GOP party leadership is going to have to come to grips that November’s win was not because conservatism made a comeback; neo-populism did. On issues of trade, there could be another area for conflict. Yet, since Obamacare’s repeal and replacement is at the top of the agenda, followed probably by tax reform and job creation—I’m sure Schumer is going to rehash the same Occupy Wall Street slogans that didn’t work. And the GOP is going to stick with Trump on these issues and vice versa.

In all, Democrats got whipped. They don’t get to dictate the agenda. The GOP was in the same position when they were in the minority under Obama. Yes, a lot of drama can unfurl. Some legislative maneuvers could be executed that brings forth a government shutdown. In the end, the office of the president is the biggest bully pulpit and it will most likely emerge on top during any showdown with Congress. I think Democrats know this. They just need to put on a show for their lefty loony bins that Democrats are trying to do something to stop Trump, even though they really can’t.