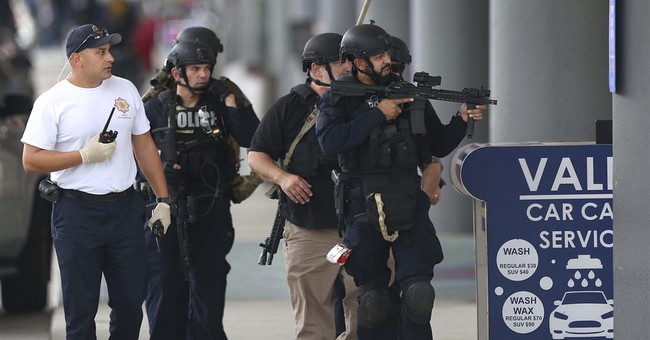 The U.S. Attorneys Office has formally charged Esteban Santiago, the suspect who committed the horrific shooting at the Fort Lauderdale-Hollywood Airport that left five people dead. One of the charges carries the death penalty (via WaPo):

The suspected gunman in an airport shooting rampage in Fort Lauderdale, Fla. — Esteban Santiago, 26, an Iraq War veteran — has been charged with federal crimes and could face the death penalty, the Justice Department announced Saturday night.

We have not ruled out anything,” George L. Piro, the FBI special agent in charge of the bureau’s Miami division, said Saturday morning at a briefing. “We continue to look at all avenues, all motives for this attack. And we continue to look at the terrorism aspect as a motive.”

Santiago is believed to have lived most recently in Anchorage with a girlfriend and a young child. Neighbors said two other children also lived at the house. Local police and FBI officials in a Saturday news conference described his life as chaotic, with frequent police run-ins.

At least four times in 2016, police were called to Santiago’s house for physical disturbances or domestic violence. It is unclear who made those calls. In one case, he appears to have taken a plea deal and, in exchange for compliance with its terms, the charges were dismissed.

The FBI says that terrorism hasn’t been ruled out, and that Santiago specifically attacked the airport. Santiago had one bag that contained the handgun used in the crime, which he checked per FAA regulations in Anchorage, Alaska before making his way to Fort Lauderdale. In the baggage claim in Terminal 2, Santiago reportedly grabbed his bag, took it into the bathroom, loaded the gun, and began firing. The suspect, who served a 10-month tour of duty in Iraq for the U.S. Army, said to have returned a changed man.

Prior to the shooting, Santiago entered the FBI’s office in Anchorage, complaining that his mind was being controlled, with the government telling him to watch ISIS videos. He also had a several run-ins with law enforcement last year, according to the Associated Press. Some of those included incidents, which were also mentioned in The Washington Post, involved a “mental health crisis.”

Nov. 7: Police called to Anchorage FBI office for a "mental health crisis" involving a man having disjointed thoughts, Tolley said. Investigating agents told officers Santiago arrived asking for help, was having "terroristic thoughts" and believed he was being influenced by the Islamic State. He was admitted to a mental health facility. A gun, found in Santiago's vehicle outside the office, along with his newborn child, was held by police for safe keeping, Tolley said.

—Nov. 17: A letter was sent to Santiago about picking up his gun.

—Nov. 30: Santiago tried to retrieve his gun, at which time the Anchorage FBI was notified and contacted Santiago at the police station. Santiago did not leave with the gun, Tolley said. He provided no details as to why, except that matters were "re-coordinated" with the FBI.

—Dec. 8: The gun was released to Santiago.