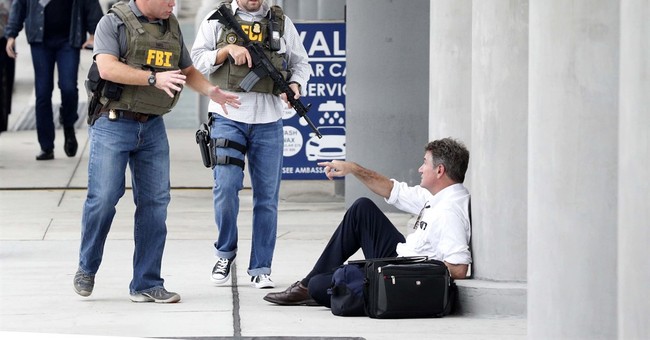 Many questions remain concerning the horrific shooting at Fort Lauderdale-Hollywood Airport that left five people dead. The shooter, Esteban Santiago, reportedly checked his gun before flying to Florida from Anchorage, Alaska. He was a U.S. Army veteran, served a 10-month tour in Iraq, which his family said left him scarred. He also reportedly ventured into the FBI’s office in Anchorage to report that he was hearing voices, claiming that he was being forced to fight for ISIS. CNN said that the voices were telling him that U.S. intelligence services were telling him to watch ISIS videos. The terrorism angle is still being investigated, but the FBI says that whatever the circumstances that are to be determined, Santiago specifically came to Fort Lauderdale to commit this shooting.

Santiago checked his gun before flying. After finding his checked baggage in claim area in Terminal 2 of the airport, he reportedly brought the case containing the firearm into the bathroom, where he loaded it and proceeded to shoot thirteen people, killing five. He unloaded three magazines before walking around for a very short period before obeying police commands to get on the ground.

Santiago didn't resist when he was taken into custody, Broward County Sheriff Scott Israel said. According to his booking information, Santiago is being held without bond on a murder charge.

He lives in Alaska, where he was a security guard.

Alaska was also the site of his last military assignment. He was a member of the Alaska Army National Guard from November 2014 until August when he was discharged for unsatisfactory performance, a spokeswoman for the guard said.

In November, Santiago paid a visit to the FBI office in Anchorage, telling agents he was hearing voices and being directed by a US intelligence agency to watch ISIS videos, law enforcement sources told CNN.

George Piro, the FBI's special agent in charge in Miami, told reporters that Santiago was turned over to local authorities and he voluntarily submitted to a mental health evaluation.

But Piro said Saturday that Santiago "came here specifically to carry out this horrific attack."

"We have not identified any triggers that would have caused this attack," he said.

On Saturday, Piro said investigators "continue to look at the terrorism angle" as a possible motive.

"We have not ruled out anything," he said. "We continue to look at all avenues, all motives."