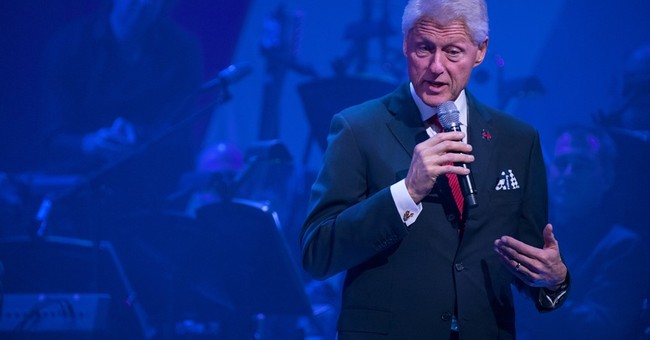 Former Democratic Virginia Senator and 2016 candidate Jim Webb had a friendly reminder to former President Bill Clinton, who mocked President-elect Donald Trump’s intelligence and said that his 1992 win over President George H.W. Bush was a real landslide. Trump clinched the presidency over Hillary Clinton with 304 electoral votes to her 227 (via Fox News):

An unidentified editor at the Bedford-Pound Ridge Record Review happened to be present at the impromptu session and revealed the details in an editorial in the paper’s print edition. The editorial did not appear online but the contents were reported by Politico.

“He doesn’t know much,” Clinton said when asked if Trump was smart. “One thing he does know is how to get angry, white men to vote for him.”

He also disputed that Trump won in a landslide, with a likely 306 electoral vote tally.

Bill Clinton reminds media that he won by a “landslide” in electoral college. Let’s remember he won only 43 percent of the popular vote.

As Leah noted, Bill also said that the FBI cost Hillary the election, and that Trump’s main asset was convincing angry, white men to vote for him. Did he forget that 53 percent of white women voted for Trump? Oh, and 62 percent of white working class women voted for Trump. It’s not just angry white dudes, Democrats. But I digress. Mr. Webb touched upon Clinton’s landslide electoral win remarks by politely reminding the former president that he only received 43 percent of the vote.

Listen, Trump won. He’s going to be our next president. But as Democrats cling to their popular vote fetish since that’s the only metric Hillary did well in thanks to deep blue California, it’s nice to remind them that a) the coasts are the reason why Clinton won more popular votes than Trump (though not a majority) giving more weight to why the Electoral College should exist; and b) the majority of Americans didn’t want Bill Clinton as their president.

Now, in reality, it doesn’t matter. In both cases, Clinton and Trump won the Electoral College vote. Period. But we all know that Democrats will whine and complain that Clinton got more popular votes, which is not how we decide who will become the next president. Yes, Michael Moore added Clinton and the third party percentages together to make the point that the majority of this country didn’t vote for Trump. Bill Clinton never won the popular vote in both of his contests; is he not considered a legitimate president? No, because he won. He got more electoral votes, which is the real contest that liberals seem to miss in their post-election meltdowns. Still, this obsession with Clinton winning the plurality of the popular vote is a silly and sad grasping at straws exercise that possibly shows one of the reasons why the Left lost to Trump: they’re out of touch and focus on things that don’t matter.