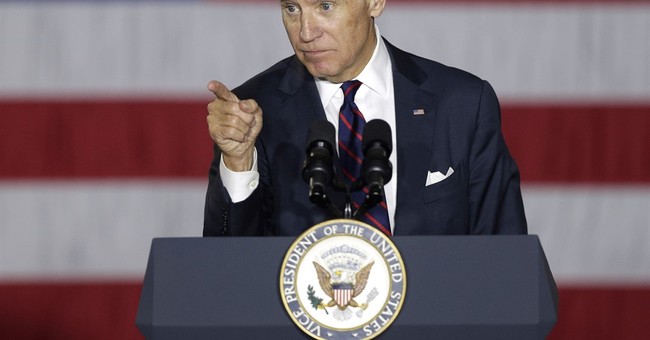 Vice President Joe Biden danced around questions about his future ambitions, telling a group of reporters on Monday that he’s open to running against President-elect Donald Trump in 2020. When pressed, however, the vice president said he wasn’t committing to anything (via CNBC):

Yeah, I am. I am going to run in 2020," Biden said when asked if he would run for office again. When asked what role he would seek, the 74-year-old vice president responded: "For president. And also, you know so, what the hell man, anyway."

The vice president said, however, he wasn't making a commitment to run when reporters asked if he was kidding.

"I'm not committing not to run. I'm not committed to anything. I learned a long time ago, fate has a strange way of intervening," Biden said.

The vice president made these remarks leaving the senate earlier this evening. According to Roll Call, Biden was presiding over a procedural vote over a bill related to his Cancer Moonshot initiative, which is aimed to expand cancer treatments and improve early detection methods:

Presiding over the vote to limit debate on what’s known as the 21st Century Cures Act, Biden teared up as Senate leaders, particularly Minority Leader Harry Reid of Nevada, talked about the cancer moonshot efforts and Biden’s late son.

A clerk swiveled around in her chair and handed Kleenex to Biden, who hid them in his hands below the presiding officer’s desk until he needed to wipe his eyes.

Is Joe yanking our chain? Maybe. Or he could very well run in 2020, becoming the candidate Democrats needs to reconnect with the white working class. At the same time, there’s the age factor; Biden will be 78 in 2020. Are there concerns whether he can connect with the millennials and other core groups of the Democratic base that Clinton failed to energize? Yes, but these folks fell in love with 75-year-old Bernie Sanders (I-VT) during the Democratic primaries this year. Biden could channel the same message by rehashing his middle class roots, support of labor unions, and calls for four years of free college.

The vice president could have a better run for the White House now that Obama is gone, Clinton is gone, and the Democratic heavyweight bench is looking quite depleted. Democrats have been devastated at the federal, state, and local level. The talent pool is quite low at this point.