Did Jill Stein Just Admit She's Dabbling In This Recount Nonsense Because Clinton Was Supposed To Win? 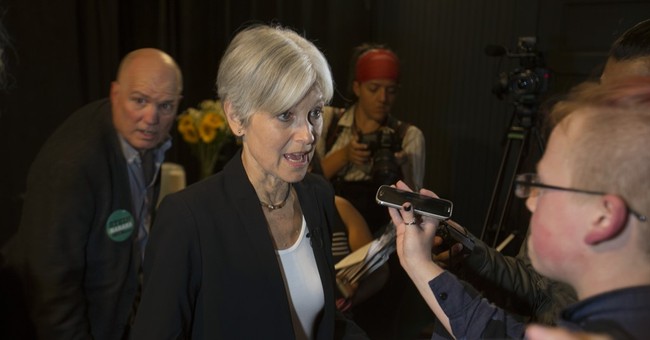 So, here’s a nice catch from Larry O’Connor over at Hot Air. I think it’s safe to say that we all were tilting our heads and saying “really?” when Green Party candidate Jill Stein said she was going to launch recount efforts in Wisconsin, Michigan, and Pennsylvania, especially when she said it was over hacking concerns. There’s zero evidence that hacking tilted the races in these three states, even the Obama administration said no hacking occurred on election night—and that the November 8 results reflected the will of the people. It’s over. Clinton lost. Yet, Stein

The three states that we chose including Michigan that only just now declared its winner. This was not a partisan choice, this was zooming in on the states that have the markings of being most vulnerable to hacking because they had thin margins. They went the opposite way of what was expected and they had some kind of voting system vulnerability.

O’Connor zeroed in on the emphasized text. Clinton was supposed to win these states, the proverbial Democratic Blue Wall, which was taken down by rural voters and millions of Obama supporters who flipped for Trump. Stein pretty much admitted that this effort is being executed because Clinton was supposed to win, but lost. Yeah, it was the biggest upset since Truman/Dewey in 1948. It happens. Pennsylvania is especially ludicrous since the system used to program the voting machines aren’t connected to the Internet, all 4,500 machines are in one warehouse that’s under surveillance 24/7, 365 days a year. Pennsylvania election experts of course say it’s possible to mess with these machines, it only takes about 15 minutes, but that requires avoiding detection. And with 4,500 machines, the process could take months. Also, an independent agency is tasked with randomly selecting voting machines throughout the state to test if there’s any malicious software on it as a secondary measure. All the grounds are covered. Moreover, Stein blew past the voter-initiated recount deadline in the Keystone State, which means she has to challenge the results in court, presenting evidence that hacking or mass voter fraud occurred.

She’s also filed a lawsuit in Wisconsin, who agreed to move forward with Stein’s petition, after they rejected a hand recount request. Almost everyone says that this is a colossal waste of time that will not change the results of the election. Stein has raised more money with this effort than during her entire presidential campaign. The Green's fundraising page, which has raised a little over $6.3 million (their goal is $7 million), says that they can’t guarantee recounts will be held, but added, “if we raise more than what’s needed, the surplus will also go toward election integrity efforts and to promote voting system reform.”

What better way to do that than by adding that to the Green Party’s 2020 platform, huh?