Remember When Chuck Schumer And These Top Democrats Voted To Build A Border Wall...In 2006? 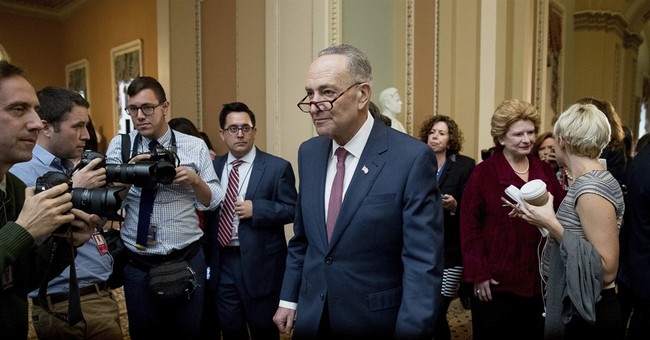 Democrats may be huffing and puffing with irritation over President-elect Donald J. Trump’s immigration policy that calls for a border wall, or some sort of physical obstacle to curb illegal immigration. Yet, two things are glaring: 1) a lot of Democrats, like incoming Senate Minority Leader Chuck Schumer (D-NY) voted for the wall; and 2) most of it is already built.

That’s right. In 2006, scores of Democrats, including Schumer, Sen. Barbara Boxer (D-CA), and Dianne Feinstein (D-CA) voted for George W. Bush’s wall in 2006, according to Rachel Stoltzfoos of The Daily Caller:

Other Democrats in the Senate who voted for the wall in 2006 are Sens. Barbara Boxer (CA), Sherrod Brown (OH — then in the House), Tom Carper (DE), Dianne Feinstein (CA), Barbara Mikulski (MD), Bill Nelson (FL), Debbie Stabenow (MI), and Ron Wyden (OR).

Also, the wall is pretty much built (via WaPo):

Since the early 1990s, politicians of all stripes have scrambled to show their commitment to border security. During that time, annual federal funding for border and immigration control mushroomed from $1.5 billion to $19.5 billion. According to one estimate, Washington spends $5 billion more on border and immigration control than for all other federal law enforcement combined.

And the result? Hundreds of miles of metal barriers have gone up. Technologies initially developed for the military have been adapted for border enforcement. A fleet of manned and unmanned aircraft have been deployed to monitor from the air. Thousands of new agents have been hired. The size of the Border Patrol doubled in the 1990s and has more than doubled again since the beginning of the century, from about 4,000 personnel to more than 21,000.

What’s much more realistic is that Trump will simply add more miles of fencing; reinforce existing fencing in key, visible places; and deploy even more border guards, stadium lighting, and the latest high-tech detection and surveillance equipment. The newest, tallest part of the Trump Wall — probably erected at one of the most visible, urban spots on the border — would be an effective backdrop for the president’s celebratory news conference announcing its construction.

Even Clinton voted for a border obstacle/fence/wall in 2006 as well.