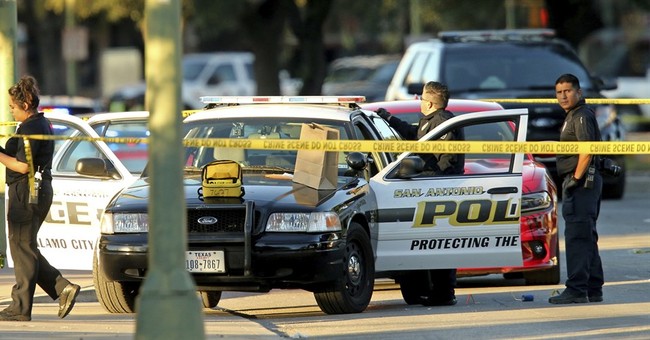 Yesterday a San Antonio police officer was shot and killed during a routine traffic stop. In the past 24 hours, three more police officers have been shot across the country, with two of them considered to be targeted shootings, according to investigators. Another officer that was caught in this string of attacks against law enforcement, got shot twice in the face, but is expected to survive. Regardless, police are on high alert (via CBS News):

In St. Louis, a police sergeant was hospitalized in critical condition but expected to survive after being shot twice in the face Sunday night in what the police chief called an “ambush.” Police reported early Monday that the suspect was later killed in a shootout with police.

Police Chief Sam Dotson said the 46-year-old sergeant, a married father of three and 20-year veteran of the department, was shot twice in the face.

“Fortunately for the blessing of God the officer’s going to survive,” Dotson said during a brief news conference after the shooting. He declined to name the sergeant.

Two other police officers were also shot Sunday night, but it wasn’t clear whether the incidents were targeted attacks.

An officer with the Gladstone, Missouri, police department near Kansas City was shot, along with a suspect. A Sanibel, Florida, officer was shot in the shoulder during a traffic stop Sunday night, and was treated for his injuries and released.

Ten days after the Dallas attack, a man wearing a ski mask and armed with two rifles and a pistol killed three officers near a gas station and convenience store in Baton Rouge, Louisiana. And earlier this month, two Des Moines, Iowa-area police officers were fatally shot in separate ambush-style attacks while sitting in their patrol cars.

The San Antonio officer, Benjamin Marconi, was shot in the head while he was writing a ticket outside police headquarters. He was shot again before the suspect drove off. CBS added that the suspect pulled up behind Officer Marconi’s car while he was administering the traffic violation. The motorist who was pulled over was released after questioning. San Antonio police Chief William McManus said there was no connection between the driver of the vehicle that was pulled over and the shooter. No motive has been specifically pointed out either other than they feel Marconi was targeted because he was law enforcement. Chief McManus released security footage of a suspect who they believe is connected to Officer Marconi’s murder:

CBS added that San Antonio police were ordered not to conduct any further traffic stops without back up after the shooting. Earlier this evening, Chief McManus said they made an arrest this afternoon.

NBC News reported that the suspect is Otis Tyrone McCain:

Local police spotted a black sedan with chrome rims that was captured on surveillance footage leaving the scene of Marconi's killing on Sunday, McManus said. After authorities tracked McCain for a few hours on Monday, a SWAT unit took him into custody without incident, he said.

"Everyone is feeling relief," he said.