McCain To Trump: I’ll Take You To Court If You Start Waterboarding Terror Suspects Again 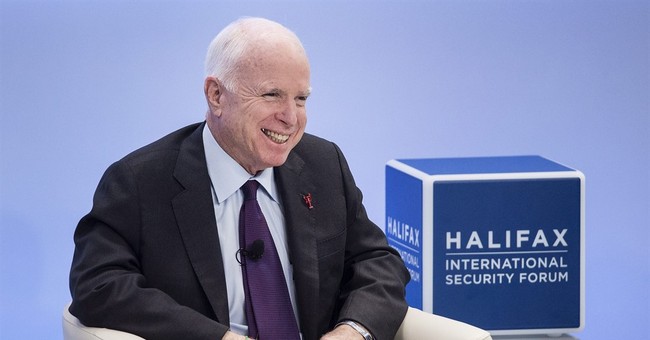 President-elect Donald J. Trump made no attempt to hide that fact that he would not hesitate to deploy waterboarding techniques suspected terrorists during interrogation. That point was made clear in December of 2015 at a rally in Columbus, Ohio.

"Would I approve waterboarding? You bet your ass I would — in a heartbeat. And I would approve more than that. Don't kid yourself, folks. It works, okay? It works. Only a stupid person would say it doesn't work,” he said

The method, which simulates drowning, has been criticized as a form of torture. The enhanced interrogation method was used by the Bush administration, much to the ire of liberal Democrats. Sen. John McCain (R-AZ), who was subject to torture while held captive by the North Vietnamese, vehemently opposes the method and said that he would bring the Trump administration into court to stop them if the program is reinstated. He made the warning at the Halifax International Security Forum (via Talking Points Memo):

"I don't give a damn what the president wants to do," he said. "We will not waterboard. We will not torture people."

McCain went even further to say that anyone who brought back waterboarding would be in court in a "New York minute."

"If they started waterboarding, I swear to you that we'd have them in court in a New York minute," McCain said.

"I don't give a damn what the President of the United States wants to do... We will not waterboard." - @SenJohnMcCain #HISF2016

There is some debate as to the effectiveness of the method. McCain has vociferously stressed that waterboarding doesn’t work, and that anyone who says so is a liar. Still, the method has been credited with forcing terror suspects in spilling key details that led to us killing Osama bin Laden (via PhillyMag):

To say the killing of Osama bin Laden created a patriotic euphoria would be a gross understatement. Spontaneous celebrations broke out across the nation. The image of thousands chanting “U-S-A” from Ground Zero was simply awe-inspiring. It was a great day for America.

According to CIA officials, that achievement was made possible in large part because their enhanced interrogation methods extracted information about the al-Qaeda courier who led the U.S. to bin Laden. If that’s not the definition of “success,” nothing is.

Jose Rodriguez has no regrets about using the "enhanced interrogation techniques" - methods that some consider torture -- on al Qaeda detainees questioned after 9/11 and denies charges they didn't work.

Rodriguez says the interrogation program, which also included stress positions, nudity and "insult slaps," was "about instilling a sense of hopelessness...despair...so that he [the detainee] would conclude on his own that he was better off cooperating with us." He says that even Khalid Sheik Mohammed, whom he termed "the toughest detainee we had," eventually gave up information.

KSM, as the mastermind of 9/11 was known, would not cooperate at first. "He eventually told us, 'I will talk once I get to New York and I get my lawyer,'" Rodriguez recalls. But KSM was subjected to the enhanced techniques, including waterboarding and sleep deprivation, and Rodriguez believes, "it was the cumulative effect of waterboarding and sleep deprivation and everything else that was done that eventually got to him."

We’ll see how this unfolds, but McCain has put the Trump White House on notice. The debate over waterboarding continues.

Trump Rising
Townhall
People living normal lives now have some thoughts for Pfizer's CEO and his prediction on when we'll get to live normal lives again
Twitchy
There's an Aesop's Fable About What the Dems Are Set to Do to Themselves
Redstate
FBI Narrative About the Jan. 6th Capitol 'Insurrection' Is IMPLODING
PJ Media