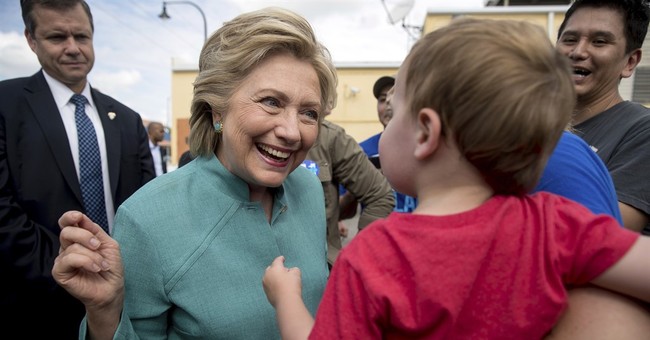 Update: The FBI announced on Sunday that after a few days' of their renewed investigation they are sticking with their initial assessment: No indictment necessary.

BUT some feel that any scenario ends with Clinton as president. That’s the consensus with some of the Democratic strategists that Washington Post writer Greg Sargent spoke with earlier this week, despite the polls showing Trump closing in on Clinton. They trust private polling more than the public polls, which one viewed as highly volatile. They also said that they would rather have Clinton detailing a positive economic vision for America rather than attacking the FBI and saying that Trump is unqualified. Still, they admit that when FBI Director James Comey informed Congress that they will be reviewing 650,000 Clinton-related emails from top aide Huma Abedin, the campaign took a hit (via WaPo):

Veteran Democratic pollster Stan Greenberg told me that internal data showed the Comey letter jarringly interrupted what looked like a path to a larger victory — and may have cost Dems some down-ballot races.

“Comey hurt a lot in terms of momentum,” Greenberg said. “We were heading towards a consolidation of the Democratic vote for her and down-ballot, and Trump voters were becoming more demoralized. Our tracking had crossed into her voters being more interested in the election than Trump voters were.”

“That changed,” Greenberg added. “That limits the scope of her win.”

Democratic pollster Celinda Lake told me that the impact of the Comey letter was to sour millennials on Clinton and on the political process — potentially to the detriment of Dem Senate candidates in states like New Hampshire, Nevada, North Carolina, and Wisconsin.

“Many millennials who were already discouraged about politics,” Lake said, saw increased “doubts whether voting for any politician makes any difference.” By way of illustration, Lake recounted that in one focus group in Nevada, one millennial said she was down to a choice between two options. When the moderator asked her if that meant Trump and Clinton, Lake recounts, this young voter replied, “No, between Clinton and not voting.”

“We are really struggling to get millennials out and this latest challenge makes that complicated,” Lake said.

Jefrey Pollock, a pollster for the pro-Clinton Super PAC Priorities USA, told me that in the few days after the Comey letter broke, the numbers tanked.

Sargent wrote that Mr. Greenberg feels that Clinton will win Florida, North Carolina, and Pennsylvania, noting that the Latino vote in Florida will be “explosive.” The New York Times reported that a surge of Latino voters could be boosting Clinton in Florida, though early voting isn’t the most reliable indicator for final results. At the same time, some of them will be watching if Trump can nab Pennsylvania, which would signal that the Clinton dam on the Electoral College is shoddy, broken, and about to break. That spells disaster on Election Night. In terms of polling, you have some polls showing Clinton with a comfortable lead, others, like Monmouth, have her up just four—and that shift occurred prior to Comey’s letter to Congress.

Real Clear Politics has moved Pennsylvania into the toss-up column. Clinton has dropped below 270 electoral votes in the CNN map. And there’s still a slice of voters who are shy about their support for Trump who I feel haven’t been polled, haven’t really participated in the electoral process, but will vote for Trump on Election Day. They may not be more than five percent (people say between two and three percent), but that’s enough to win an election with an electorate that’s probably going to be 70 percent majority white—and these shy Trumpkins will be predominantly white working class.

Also, there’s the chance that we could see a spike in nose holders, though Democrats counter that the email stories aren’t new—and that voters have already made up their minds about the matter months ago. That may be true, but even former top Obama aide David Axelrod said that he doesn’t know the impact of Comey’s letter (via WSJ):

In a campaign in which a historic number of voters is disgusted at both candidates, the disclosure may just increase the number of what analysts in both parties have come to refer to as “nose holders”: People who will hold their nose and vote, if they vote at all. “This election has had a historic number of nose holders,” says Scott Reed, a Republican operative who ran Bob Dole’s 1996 presidential campaign. Mr. Comey’s move “has the ability to dampen turnout even more.”

On the other hand, most voters seem long ago to have locked in on their views of the two candidates, and those views are hard to change this late in the game.

“I doubt it will have much effect, and even if it has some, it won’t be enough to change the outcome of the presidential race,” says Democratic pollster Mark Mellman. “Clinton email stories are hardly new. Most everyone has already formed an opinion about the matter.”

David Axelrod, a top strategist for Mr. Obama’s presidential campaigns, says it’s probably too late for such an event to prove decisive. He adds, though: “But the truth is, no one knows the true impact, and we probably won’t until we can look at polls and early vote data at the middle of the week.”

We’re two days away from Election Day, folks. We’ll see how all the data stacks up.

The emails from Abedin were found on Anthony Weiner's laptop. Abedin shared that device, which was being reviewed in a separate investigation into Weiner's online interactions with an underage girl. That's how the bureau found this latest trove of emails.This new review by the FBI is going to last well beyond Election Day.