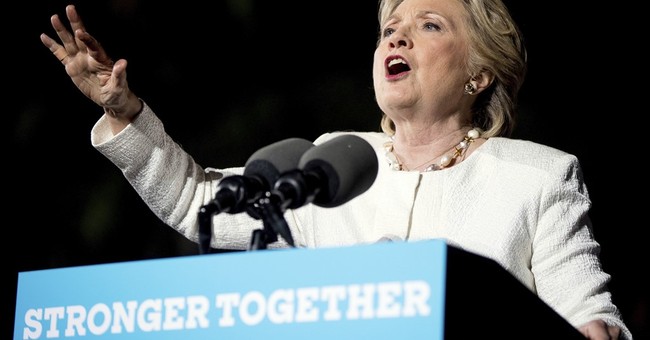 28% of Florida early voting Republicans have voted for @HillaryClinton

Trump is ahead in Florida by the slimmest of slim margins. Yet, with early voting having already begun, a new survey shows that Clinton is comfortably ahead with those who have already voted 55/38—and that 28 percent of Republicans voted for her, according to The Hill.

Here’s part of the summary of the TargetSmart/William and Mary poll:

In the poll, Clinton holds a 48 to 40 percent lead over Donald Trump in the Sunshine State, a more advantageous position for Clinton than most other publicly available polling has suggested in the last week or so. As of the morning of November 1st, 2016, TargetSmart tracks that 3,695,359 people have already cast their votes in Florida. Leveraging TargetSmart’s proprietary voter file - that is updated daily through the early voting window - this poll reached a significant number of voters who have already participated. Among those early voters (who were asked which candidate they had voted for), Clinton outpaces Trump by a 17-point margin, 55 to 38 percent.

Republican incumbent Sen. Marco Rubio leads Democratic challenger Rep. Patrick Murphy 49/43, though they’re almost neck-and-neck in early voting 48/47—with that one point break going to Murphy. Yet, is this a red flag for Trump in the Sunshine State? Without Florida, Trump is finished. Period. Yet, the polls are tightening across the country, especially down-ticket. And the enthusiasm for Trump is remaining steady, though not nearly near it was for Romney in 2012. Regardless, ever since FBI Director James Comey announced that the bureau will review 650,000 new Clinton-related emails from top Hillary ally Huma Abedin, Democratic enthusiasm has taken a nosedive. Clinton leads with those planning on voting early, but Trump takes a decisive advantage with those who plan on casting their ballots on Election Day.

Election Day is less than a week away.

UPDATE: Well, two things I forgot to mention: 1) GOP early voting has slightly outpaced Democrats in Florida; and 2) early voting isn’t the best gauge for deciding who will win the state (via RCP/Sean Trende):

Now we might be able to get a sense of how Democrats are performing in the early vote by looking at African-American turnout or overall Democratic turnout (in states with partisan registration), but we can’t know how independents are voting. We might make assumptions about this by looking at public polling, but then what value are we adding beyond what the public polling says? Plus we’re incorporating the error margins of public polling into our estimates, which will be even greater for demographic subsamples.

The real problem with this, however – and this is true with a lot of early voting analysis – is that for any of this to work we have to assume that the early vote is somehow representative of the Election Day vote in order to fill in the second half of the equation. The problem is, it isn’t. Research suggests that the early vote tends to be comprised of more partisan, higher propensity voters. In the most recent elections, they have often skewed Democratic, most likely as a side effect of increased Democratic emphasis on early voting (compare this with Donald Trump, who has been telling his supporters to vote on Election Day).

Second, predictions from early voting have a decidedly mixed track record. As University of Denver political scientist Seth Masket has suggested, the relationship between early voting results and Election Day results is pretty weak. That isn’t to say it is non-existent, but we should probably expect some type of relationship between the partisan split of early votes and the state as a whole (that is, we’d expect more Democrats to vote early and on Election Day in Maryland than, say, Utah.) A contradictory report has been published at the Monkey Cage blog, but that finds a relationship utilizing proprietary Catalist data, not the publicly available data from which everyone is presently extrapolating.