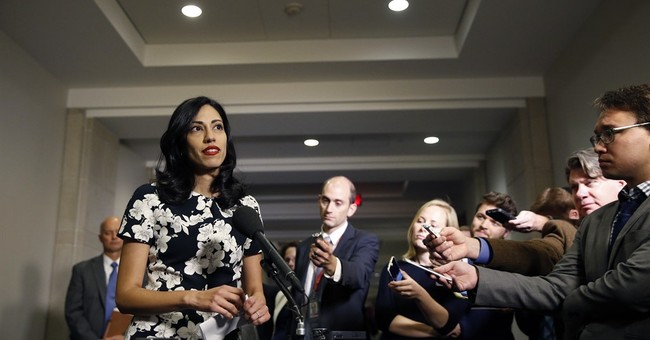 Editor's Note: Headline changed to reflect that this is a rehash of an older story.

Huma Abedin may be in the legal crosshairs for possible perjury after new emails relating to the FBI’s probe into Clinton server were found on her estranged husband’s laptop. Anthony Weiner, who is under investigation for illicit online interactions with an underage girl, shared this device with Abedin. Abedin swore under penalty of perjury at a June deposition for a lawsuit filed by Judicial Watch that she had turned over all devices to her lawyers that contained State Department materials. In February of 2013, she signed a routine form saying that all State Department-related documents had been turned over. That’s obviously not the case.

Yet, let's remember who Ms. Abedin is within the Clinton empire. She's obviously valued and trusted as she collected three paychecks from the State Department, The Clinton Foundation, and the Bill Clinton-affiliated consulting firm, Teneo. To make matters worse, a 2013 GAO report found that the State Department didn’t do a good job keeping updated records on the role Abedin played, including the role she herself was hired to do. Abedin “left” the State Department in 2012, but was rehired as a sub-contractor with the designation of “special government employee.” Three paychecks from three tentacles of the Clinton octopus—and no one, besides Republicans, thought this could be a problem? As for Abedin, I guess all one can say is why hell-o, Ms. Moneybags. Ben Brody and Nick Wadhams of Bloomberg wrote about this in August, but let's go down memory lane again:

Huma Abedin stepped down from her post as deputy chief of staff at the State Department and Hillary Clinton’s ever-present personal assistant on June 3, 2012. Only she didn’t really leave.

Instead, in a reverse twist on a program intended to bring talented outsiders into government, Abedin was immediately rehired as a “special government employee.” She also took paying jobs with the Clinton Foundation and Teneo Holdings, a consulting firm with international clients that was co-founded by a foundation official who also was Bill Clinton’s long-time personal aide.

When Clinton was awaiting confirmation as President Barack Obama’s secretary of state in 2009, she wrote a letter to the State Department’s chief ethics officer promising that she wouldn’t “participate personally and substantially in any particular matter that has a direct and predictable effect upon this foundation, unless I first obtain a written waiver or qualify for a regulatory exemption.”

But that “did not preclude other State Department officials from having contact with the Clinton Foundation staff,” just as they “are regularly in touch with a wide variety of outside individuals and organizations,” department spokeswoman Elizabeth Trudeau told reporters last week.

That’s where Abedin came in.

Abedin wrote that she provided “strategic advice” to Teneo’s management team but never did “any work on Teneo’s behalf before the department” nor provided information from government sources to help its clients make investment decisions, as Republicans had suggested.

Last week, Judicial Watch produced e-mails including a 2009 exchange in which Band wrote Abedin that it was “important to take care of” an individual, whose name was redacted. Abedin replied that “personnel has been sending him options.”

In another 2009 exchange, Band asked Abedin and Cheryl Mills, Clinton’s chief of staff, to put Lebanese-Nigerian billionaire Gilbert Chagoury in touch with a State Department "substance person" on Lebanon. The Chagoury Group co-founder has given between $1 million and $5 million to the Clinton Foundation, according to a list of donors posted online.

The publication added the 2013 GAO report findings concerning Abedin’s somewhat shoddy and flaky new job description at State, the new emails released by the State Department just confirm what everyone thought about this role to begin with; that it was just another way for Abedin to serve are her executive right-hand woman, who was in near constant-contact with Doug Band, who helped get the Clinton Foundation running and co-founded Teneo.

That company has come under some scrutiny for a leaked memo found in a Wikileaks document dump shows how Band, Teneo, and Bill Clinton set up lucrative business consulting jobs and paid speaking opportunities, while Hillary was secretary of state. Also, threw a few pennies (in this case, millions of them) towards the Clinton Foundation as well. MSNBC’s Joe Scarborough went a bit further saying they’re bragging about shaking down foundation donors for $66 million that will be reaped by the power couple personally. Again, no direct evidence of quid pro quo in the 13-page document, but surely adds to the notion of the Clinton’s engaging in unethical practices regarding their nonprofit and the allegations of paid access, of which Huma was right there all along regarding Hillary’s end of this enterprise.
House Forces Taxpayers to Fund Abortion, Even After Speaker Pelosi's Bishop Confirms Church Stance on Issue
Rebecca Downs
Victims Rights Advocate Running for AG Has 'Determined' Message for World Day Against Trafficking in Persons
Rebecca Downs
Virginia County School Board Votes Against Implementing State's Required Transgender Policies
Landon Mion
Now That It's Politically Expedient for Him, Biden Acknowledges Trump's Role in Vaccine, Sort of
Rebecca Downs
Poll Shows There is Shifting Support on Jan. 6 Select Committee