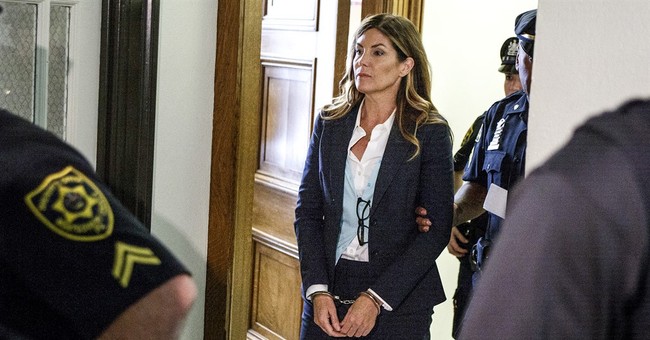 Pennsylvania’s two-year ordeal with its Attorney General Kathleen Kane has come to an end. The first female Democrat elected to the office (it became an elected position in 1980) was handcuffed and led out in total disgrace after being found guilty of politically-motivated disclosures of a grand jury investigation that went nowhere and for perjury. Kane was sentenced to a 10-23-month jail sentence yesterday, closing a rather toxic chapter in public life for the Keystone State (via The Morning Call):

"This case is about ego, ego of a politician consumed with her image from Day One," Judge Wendy Demchick-Alloy said during Kane's sentencing Monday in Montgomery County Court. "And instead of focusing solely on the business of fighting crime, her focus was on defeating these perceived enemies."

Demchick-Alloy noted Kane, once a rising Democratic Party star, ascended quickly to become the state's top law enforcement officer, arriving as a political novice and neophyte. Kane, however, failed to make the transition from politician to public servant once she took office, the judge said.

"Ego must be set aside after the election with the sole purpose to serve the public in order to ensure the public's confidence in you and the system," Demchick-Alloy said.

Demchick-Alloy noted Kane's crimes, orchestrating the release of secret information about an abandoned fraud probe targeting a Philadelphia civil rights leader and lying about it under oath, damaged the backbone of Pennsylvania's justice system

So, how did Kathleen Kane go from a rising Democratic star, rumored to be a name floated to challenge Sen. Pat Toomey, to a disgraced former attorney general whose bloated ego poisoned her office, demoralized her staff, and rendered her incapable of transitioning from campaigner to law enforcer? Well, it goes back to Porngate and the Jerry Sandusky case involving child abuse at Penn State. Amber Phillips of The Washington Post has a great rundown of where her fall from grace began, the rivalries involved, and the inevitable grand jury that brought her down.

After winning the 2012 election, Kane promised to look into then-Republican Gov. Tom Corbett’s investigation into Jerry Sandusky, who is serving a 30-60-year prison sentence for the sexual abuse of young boys over a 15-year period, which drew the ire of state prosecutor Frank Fina, who used to work for Corbett. No wrongdoing was found on Corbett’s part, but thousands of sexually explicit emails between top members of PA’s political class were discovered and released. Fina was involved in what we now know as “Porngate,” as were two state Supreme Court justices who resigned due to the fallout. Phillips noted this was the first salvo fired between Fina and Kane that eventually engulfed the whole state:

Shortly after Kane took office in 2013, she decided to shut down an undercover corruption investigation against four Democratic Philadelphia-area state lawmakers and a traffic court judge who were caught accepting cash and gifts from a lobbyist.

The prosecutor running that investigation for the past three years was none other than Fina, who ran the attorney general's public corruption unit under Corbett.

This was all playing out behind the scenes until news leaked that Kane wasn't going to pursue corruption charges against some in her own party. The leak came from Kane's office. She blamed Fina for the breach and told the public by way of explanation that she thought the corruption case targeted African Americans and was poorly managed.

Then, in 2014, there was another leak on what seemed like a totally unrelated case. The Philadelphia Daily News got hold of a memo from a 2009 secret grand jury investigation into a former NAACP leader [Jerry Mondesire] that never went anywhere.

This time, the leak was potentially damning for Fina, who had decided not to prosecute the local official despite questions about the Philadelphia chapter's use of funds.

Kane's defense lawyer would later say she wanted those documents to be public to show Fina's decision not to prosecute but that she didn't release them herself.

But let’s go back even further to what Phillips mentioned about the corruption probe into Philly politicians that was shut down and reported in The Philly Inquirer on March 16, 2014. What’s missing from The Post article is that Kane thought this piece made her look soft on crime and it certainly didn’t help that she thought Fina was behind the article. Hence, the need for immediate retaliation using The Philadelphia Daily News story against Fina. To carry out the counteroffensive, she solicited the help of her top aide Adrian King and political consultant Joshua Morrow (via Steve Esack/The Morning Call 2/25/16):

The county's affidavit claims Kane targeted Fina because she blamed him, without proof, of being a source in a March 16, 2014, Philadelphia Inquirer story that she thought made her look soft on crime.

Kane sought to damage Fina's reputation, the affidavit states, by providing the Philadelphia Daily News with information from a closed 2009 grand jury investigation Fina supervised. The 2009 grand jury dealt with government grants bestowed on organizations run by J. Whyatt Mondesire, ex-chief of the Philadelphia branch of the NAACP, the affidavit states. Mondesire, who has since died, was not charged.

That Esack article was based on FBI recordings between Morrow and King, who Kane’s legal team would later try to blame for the whole leaked document fiasco.

Wilkes-Barre’s Citizen’s Voice noted in their timeline that on November 17, 2014, Kane said that she spoke to King about the Mondesire probe, but added that she didn’t authorize those sealed documents to be disclosed. The problem is that King said Kane called him on April 22, 2014 to deliver a package to a reporter, who he then gave to Morrow, who in turn delivered to reporter Chris Brennan. That package contained the Mondesire documents.

On May 8, 2014, Brennan calls Fina about the probe, in which Fina suspects that a leak has occurred and calls Montgomery County Judge William Carpenter.

On May 29, special prosecutor, Thomas Carluccio, is appointed by Judge Carpenter to look into The Philadelphia Daily News leak, which was challenged by Kane. Kane’s arguments are rejected and the story on the Mondesire probe is published on June 6, 2014.

The November 2014 testimony is where Kane lands in hot water for perjury. On December 19, 2014, The Voice adds that the grand jury recommends to Montgomery Country District Attorney Risa Ferman that the charges of perjury, false swearing, official suppression, obstruction of justice, and conspiracy should be filed against Kane. On August 6, 2015, Ferman charges Kane (via NYT):

That grand jury concluded that Ms. Kane had orchestrated the leaks as a campaign of retaliation against Mr. Fina, and lied about her actions in her testimony. Its report, delivered to Ms. Ferman in December and made public in April, recommended criminal charges, but left the matter up to Ms. Ferman.

In addition to charging Ms. Kane, the district attorney charged a member of her security detail, Patrick R. Reese, with indirect criminal contempt, claiming that he gained illegal access to information about last year’s grand jury inquiry while it was underway.

At the start of this year, Ferman is elected as a county judge. New DA Kevin Steele takes over the case; Kane files a motion to dismiss the charges on May 26, 2016, which is rejected by Judge Demchick-Alloy. The State Superior Court upholds the decision, according to the Voice. On August 7, the Kane trial begins. Phillips added that the court proceedings devolved into a nasty affair, with Morrow testifying (after being given immunity) that Kane was out for blood, “unhinged” in her pursuit to strike back at Frank Fina. Kane decides not to testify in her own defense and no defense witnesses were called. It was all about broadsiding the prosecution’s witnesses, trying to cast doubt in their testimonies. It doesn’t work. On August 15, Kane is found guilty on all counts after the jury deliberated for less than five hours.

The Morning Call’s Peter Hall wrote that Kane asked for leniency in sentencing so as not to separate her from her family, apologized to the people of Pennsylvania for disgracing the office of Attorney General, and regretted how the now-late Jerry Mondesire’s final days “were anything less than peaceful and happy.” Mondesire’s reputation suffered as a result of this investigation.

The Philadelphia Inquirer reported that Kane is free on $75,000 bail and will probably remain free until the appeals process is done; Kane’s team vowed to do this upon her conviction. It’s quite the fiasco, one that involved every avenue of the state’s legal authority. It was all-out war, but in the end, Kane lost. The publication added that Kane tried to say that she was a victim of the political “Good Ol’Boy’s club” in Pennsylvania due to Porngate, though any mention of that event was barred from her trial. Yet, what her colleagues have said about her, and the damage she has done to the office, point to only one thing in the wake of this hyper-partisan trial: the lady was bad news, whose "Nixonian espionage, she created a terror zone" in the PA Attorney General's office.

Erik Olsen, a top prosecutor, said he was thrilled when Kane won election, thinking her victory would bring a much-needed fresh perspective to an office he said had at times been "misogynistic and mean-spirited."

Instead, he testified, "through a pattern of systematic firings and Nixonian espionage, she created a terror zone in this office."

A former state prosecutor, Clarke Madden, testified that Kane's wrongdoing caused the State Police and the FBI to refuse to cooperate with their office, discouraged victims and witnesses from being helpful to their cases and led judges and defense lawyers to subject prosecutors to sarcastic and sniggering remarks.

Madden, who left the attorney general's office last year, said the atmosphere under Kane became one of "abject demoralization that settled like a poison cloud over the office."

It’s a rather embarrassing, irrational, and somewhat puzzling episode of PA politics. It makes you wonder how the office would have operated under Republican David Freed, Kane’s 2012 opponent.