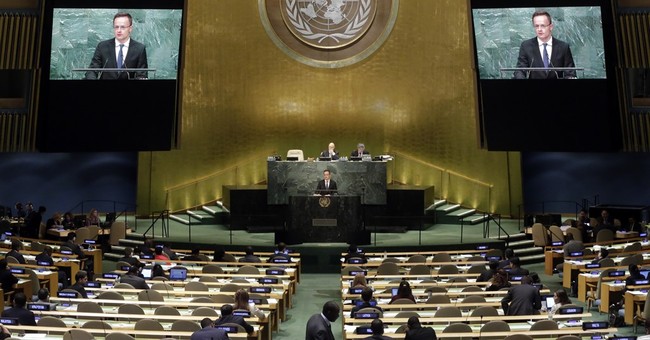 A United Nations-affiliated panel has said that the United States owes reparations to its black population for a history of “racial terrorism.” As Ishaan Tharoor wrote for The Washington Post, the United Nations’ Working Group of Experts on People of African Descent came to these nonbinding conclusions in their report released from Geneva, with reparations coming in the form of financial payments, debt cancellation, increased opportunities in education, health initiatives, and a formal apology. Oh, and they also touched upon the string of police-involved shooting deaths as well:

The group of experts, which includes leading human rights lawyers from around the world, presented its findings to the United Nations Human Rights Council on Monday, pointing to the continuing link between present injustices and the dark chapters of American history.

"In particular, the legacy of colonial history, enslavement, racial subordination and segregation, racial terrorism and racial inequality in the United States remains a serious challenge, as there has been no real commitment to reparations and to truth and reconciliation for people of African descent," the report stated. "Contemporary police killings and the trauma that they create are reminiscent of the past racial terror of lynching."

Citing the past year's spate of police officers killing unarmed African American men, the panel warned against "impunity for state violence," which has created, in its words, a "human rights crisis" that "must be addressed as a matter of urgency."

Despite substantial changes since the end of the enforcement of Jim Crow and the fight for civil rights, ideology ensuring the domination of one group over another, continues to negatively impact the civil, political, economic, social and cultural rights of African Americans today," it said in a statement. "The dangerous ideology of white supremacy inhibits social cohesion amongst the US population."

Are these experts or a bunch of overly educated urban-based elites with doctorates in social justice warrior studies? White supremacy is the glue that keeps our nation together? That’s unadulterated crap. Our values, our Constitution, our belief in the defined system of rights that we felt so deeply as to rebel against to British rule is what keeps us together and makes us Americans—or at least that’s what I thought. Our country was founded on these unalienable rights, not around kings or ethnic groups as other nations in the past. Second, and most importantly, if this is some ridiculous way to foster a racial healing, it’s not going to work. In fact, most likely it will exacerbate the already abysmal race relations we have now. We’re blaming a racial group who had zero stakes in slavery. No white person today is to blame for slavery or racial terrorism. No white person today is responsible for the past actions of their racial group; people they didn’t event know. And have we forgotten that the abolitionist movement was comprised of…religious, church-going white folk? Who soaked the battlefields of Gettysburg, Antietam, and other battlefield of the American Civil War with blood to end slavery? Oh, that was mostly white people too. It remains our bloodiest war our country has ever fought, with over 600,000 dead, but it was one where the heart and soul of our country was on the line. In the end, slavery was forever abolished.

Yes, more works needs to be done. Yes, Jim Crow, the lynchings, and other forms of discrimination today are not pleasant, but we, ourselves, are destined to fix these problems, not some UN board in Geneva. This is just a mass exercise of guilt by association that will not mend any fences or heal wounds. It will merely reopen them, with both groups being even further apart. Blessedly, these recommendations, like most UN actions, lack teeth. They’re non-binding—and they should be ignored. At the same time, I’m sure more than a few social justice warriors will cite this report in various articles and blog posts.

What is it with the UN and their inability to realistically execute the function of conflict resolution? They’re utter failures at it.