Trump Picks Up Another Endorsement From Immigration Enforcement Group 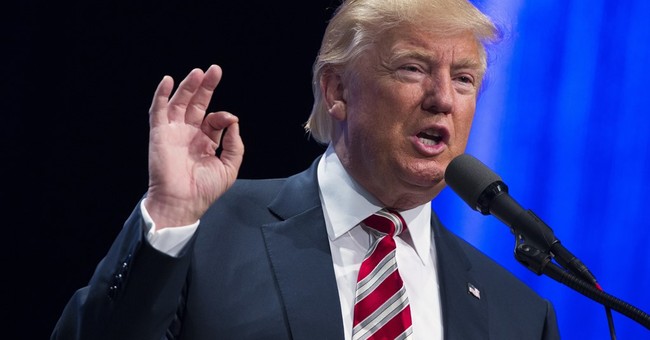 Republican nominee Donald Trump clinched the endorsement of the union that represents the agents of Immigration and Customs Enforcement on the eve of his showdown with Hillary Clinton. The president of the union slammed President Obama for his unconstitutional executive orders on deferred action for children and parents of illegal immigrants, and called Clinton’s agenda “the most radical” proposal in U.S. history (via The Hill):

Chris Crane, the president of the National ICE Council, described the men and women of Immigration and Customs Enforcement as the "last line of defense for American communities."

"Our 5,000 officers, underfunded and undermanned, are responsible for enforcing immigration laws in a nation of 320 million people," Crane said in a statement.

"Our officers come into daily contact with many of the most dangerous people in the world - cartel members, gang members, weapons traffickers, murder suspects, drug dealers, suspects of violent assault - yet ICE Officers are unable to arrest or are forced to release many of the most dangerous back into U.S. communities due to unscrupulous political agendas and corrupt leaders."

Crane called the immigration plan put forth by Clinton the "most radical immigration agenda proposal in U.S. history."

He said her plan would result in thousands of American deaths and an "uncontrollable flood of illegal immigrations across U.S. borders" and framed her proposal as "total amnesty plus open borders."

Crane added that Trump is the only candidate running that has policies that would secure the border, saying that Americans have been told fantastic lies about our immigration system.

“Donald Trump is the only candidate who is willing to put politics aside so that we can achieve that goal," he said.

This isn’t the only endorsement Trump has received from a law enforcement arm tasked with border security. The National Border Patrol Council endorsed him in March, which represents 16,500 Border Patrol agents. It was the organization's first endorsement in a presidential election ever.