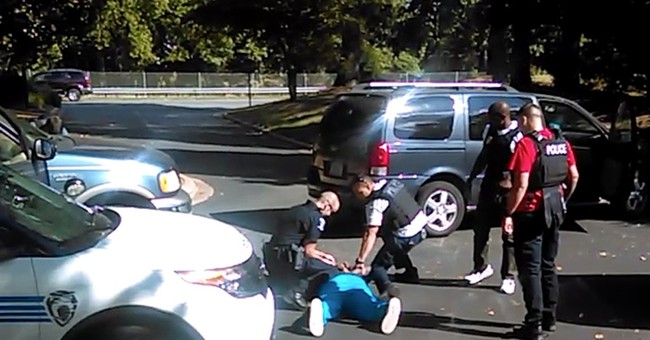 Video footage of Keith Lamont Scott being shot and killed by Charlotte police was released today, the footage taken by Scott’s wife, Rakeyia, on her phone. The images are shaky and there is no definitive angle to see what Scott was doing the moment he was shot by police. You can hear Scott’s wife pleading with officers that he isn’t armed, that he has a traumatic brain injury, and that he just took his medication. He wasn’t going to harm them. At the same time, you can hear officers give clear commands for Scott to drop his firearm. One officer asks for a baton to presumably smash the window of Scott’s vehicle. The footage was in the possession of Scott’s family lawyer, who then turned it over The New York Times. When police fired upon Scott, his wife, shocked, says that he better not be dead while continuing to record the officers securing the area, with Scott’s body laying on the pavement [Warning: graphic content and strong language]:

RAKEYIA SCOTT: He didn’t do anything.

RAKEYIA SCOTT: He doesn’t have a gun. He has a T.B.I. (Traumatic Brain Injury).

RAKEYIA SCOTT: He is not going to do anything to you guys.

OFFICER: Drop the gun. Let me get a fucking baton over here. [muffled]

RAKEYIA SCOTT: Keith, don’t let them break the windows. Come on out the car.

RAKEYIA SCOTT: Keith! Don’t you do it.

OFFICER: Is everybody good? Are you good?

RAKEYIA SCOTT: He good. Nobody ... touch nobody, so they’re all good.

Now, the alternate narrative is that Scott had a book, not a gun. This is false. There is no doubt that Scott had a gun, according to Police Chief Kerr Putney. Police say that Scott had the weapon in his hand at the time he was shot, but Putney said that there is no "definitive visual evidence that would confirm that a person is pointing a gun,” nor is there clear shots that he was brandishing the firearm. Because there is no definitive angle with the official police footage, Chief Putney has decided to withhold releasing it to the public (via WaPo):

Putney suggested that his department has no imminent plans to release the video footage to the public, and the Scott family’s attorneys made no promises to reveal its contents once they had seen it.

“Transparency is in the eye of the beholder,” Putney told reporters. “If you think I’m saying we should display a victim’s worst day for public consumption, that is not the transparency I’m speaking of.”

Putney said his department would release the video only “when we believe it is a compelling reason,” but the footage — which, he noted, doesn’t definitively show Scott pointing a gun — probably would not do much to calm the city anyway.

“I can tell you this: There’s your truth, my truth and the truth,” Putney said. “Some people have already made up their minds.”

The officer who shot Scott, Brentley Vinson, was undercover and did not have a body camera on him, but several other officers were wearing them and there is multiple dash cam footage as well. The question is what will this do to bring clarity to the situation? If the official video is vague, this footage taken by the victim’s wife is even hazier. If anything, it could exacerbate the string of protests that have engulfed the city, with some nights becoming increasingly violent. Last night’s protests were considerably less intense, with police allowing protestors to remain on the streets past the newly mandated 12 a.m.-6a.m. curfew imposed by Mayor Jennifer Roberts because they were orderly. Wednesday night was a total disaster, with looting, beatings, and one person, 26-year-old Justin Carr, being shot. Carr has since passed away from his injuries.

That night prompted Gov. Pat McCrory to declare a state of emergency, which prompted the deployment of the State Highway Patrol and the National Guard. Let’s see what happens tonight.

Scott was killed on Tuesday after officers encountered him sitting in his car near The Village at College Downs complex near the University of North Carolina at Charlotte. They were looking for someone else in the vicinity with an outstanding warrant.