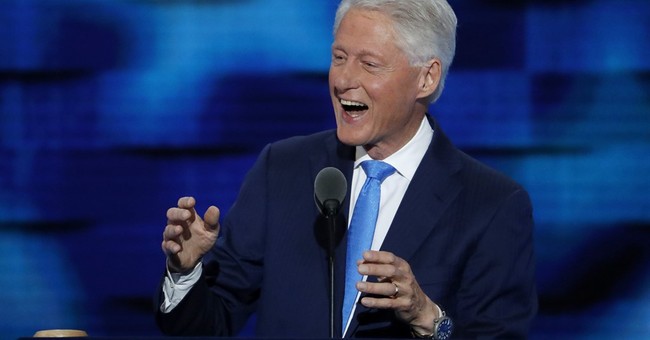 It’s either amnesia or sheer hypocrisy. Take your pick with Bill Clinton slamming Donald Trump’s slogan of “Make America Great Again,” where the former president alleged that it's a racially insensitive slogan at a campaign stop in Pittsburgh on September 9.

“That message…America great again is if you’re a white Southerner, you know exactly what it means, don’t you. What it means is I’ll give you an economy you had 50 years ago and I’ll move you back up on the social totem and other people down.”

The Wall Street Journal had more:

Saying ‘I’ll make it great the way it was 50 years ago’ ignores two things,” the former president said. “First of all, it wasn’t so great for a lot of people 50 years ago. If you were African American, if you were Latino, if you were a first-generation immigrant, if you belonged to some religions and if you were gay, forget about it.

“It just wasn’t so great for some people.”

Yeah, here’s the problem, Slick Willy. You used that phrase on various occasions. Fox News found that you said, “I believe that together we can make America great again” in Little Rock, Arkansas back in 1991, as you were gearing up to run against and eventually defeat incumbent Republican President George H.W. Bush. And you mentioned how we can make America great again on the stump the following year.

You also said in a 2008 ad for your wife’s first presidential campaign, that “It’s time for another comeback, time to make America great again.”

So, if there are any racial connotations with Trump’s slogan, which there isn’t any, but for the sake of argument—if these are racially charged remarks, you said them first. It’s a classic if we say/do things it’s fine, but when the Republicans do it, it’s a problem. It’s the same old song. We’ve all seen this movie before—and it’s just ridiculous. Prior to Obama, Bill Clinton was considered the first black president, but apparently he’s retroactively guilty of being racist…if we’re going by what he says now about what Make America Great Again means. Then again, he’s a Democrat and a Clinton; rules don’t apply.