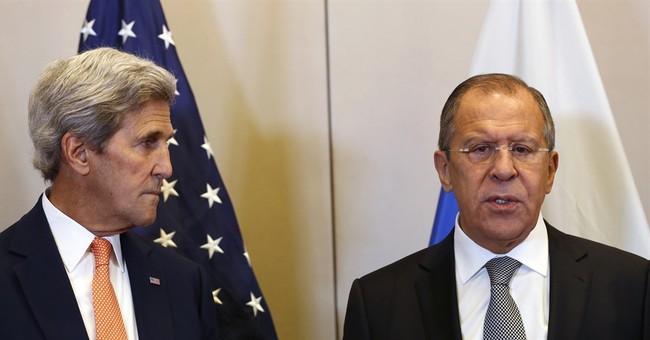 Well, after a prolonged discussion about our relations with Russia, Secretary of State John Kerry announced that our two countries have reached an agreement on a joint peace plan for Syria (via WaPo):

“Today the United States and Russia are announcing a plan which we hope will reduce violence, reduce suffering and resume movement toward a negotiated peace and a transition in Syria…that if followed, has ability t o provide a turning point, a moment of change,” said Secretary of State John F. Kerry.

The deal nearly seemed to have slipped away earlier in the evening, when Russian Foreign Minister Sergei Lavrov said he was thinking of “calling it a day” on Syria talks with the United States, at least until next week, after waiting for more than five hours for Kerry to obtain approval from Washington for a deal he said the two had agreed upon.

As Kerry has negotiated with the Russians over the past several months, officials at the Pentagon and some at the White House have done little to hide their skepticism about the proposed deal. Some have argued that Moscow was trying to run out the clock until the end of the administration in hopes of a better deal from President Obama’s successor. Others have insisted that Russia is certain that its chances of agreement would worsen, particularly if Hillary Clinton is elected.

In broad terms, the agreement that Kerry and Lavrov have reached calls for a “pause” in the fighting between the U.S.-backed Syrian opposition and forces of President Bashar al-Assad and his Russian and Iranian allies — particularly around the besieged city of Aleppo — to allow safe and sustained delivery of humanitarian aid. That is to be followed by a more wide-ranging cease-fire, along the lines of a truce agreed last February that lasted only several weeks.

We’ll see how this plan goes. Like the Post reported, this isn’t the first time a peace plan was announced, agreed to, and totally collapse. Russia has long been reluctant to sign off on any plan that removes Syrian President Bashar al-Assad from power. The U.S. is stanchly supportive of efforts to remove the Syrian president.

The publication added that if the ceasefire continues this time around, coordinated airstrikes with Russia against “agreed terrorist targets” could happen. The U.S. Military, however, has balked at this provision of the agreement. Upon news of an agreement being reached, Washington relentlessly hurled questions at Kerry. How much involvement did President Obama have in these discussions? It’s not known; the Post said he left to play golf at Andrews Air Force.