'Campaign Malpractice': Trump Has Only ONE Field Office In Florida 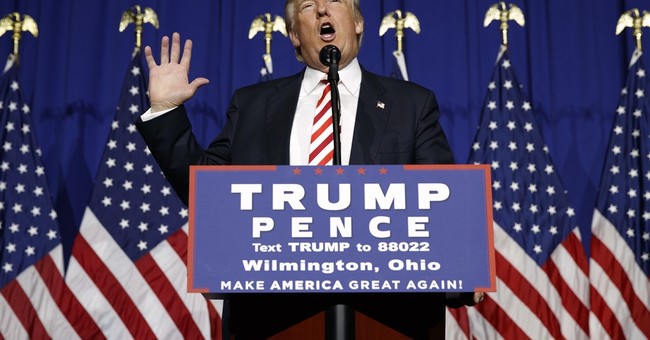 Republican nominee Donald Trump is closing in on Hillary Clinton, but there are disconcerting aspects of his campaign operation, especially in the key swing state of Florida. Trump needs to win Florida and Pennsylvania to win the presidency in November. One state hasn’t gone Republican since 1988, while the other went for Obama twice. It’s a tall order, but the Real Clear Politics Average in the Sunshine State shows Clinton with a 2.7-point lead over Trump. It’s within reach. It’s a winnable state for Trump, so why does he only have one field office in a state?

The Republican nominee only has a Sarasota statewide headquarters open in the state he absolutely must win to be elected president, while the Democratic nominee has 51 offices even though she has multiple paths to winning that don't require Florida's 29 electoral votes.

"We are running a 67-county strategy. We're not taking any vote for granted, and that includes making sure we are within the communities where the people are that support this campaign," said Simone Ward, Clinton's Tampa-based Florida campaign director. "You've got to build a strong ground game, and you can't wait until the last minute to do that."

Karen Giorno, a Florida-based senior adviser to the Trump campaign, noted that they have 67 "county CEOs" helping identify and mobilize Trump supporters, 70,000 active volunteers, and three RVs working as "mobile field offices" criss-crossing the state and stopping at local festivals, gun shows and other functions to help organize Trump voters. Two dozen field offices are poised to open during the week of Sept. 5, she said.

It’s the latter part of what Tampa Bay reporter Adam C. Smith wrote that has Trump confident of victory in the state. Then again, Trump said that dozens of field offices would be opened on August 8; there’s just one.

People will be very surprised by our ground game on Nov. 8. We have an army of volunteers and people with GREAT SPIRIT! They want to #MAGA!

Chris Cillizza noted that this is utterly remarkable in a bad way—and that fundamentals of campaign outreach and turnout operations that run through these offices is still critical to winning elections (via WaPo):

Trump is making a big mistake in Florida. ... @JoeNBC: His ground game is 'absolutely staggering.' https://t.co/z7TJWFD4XI

President Obama had 102 field offices in Florida during his 2012 reelection race. Rival Mitt Romney had 48. No candidate in modern memory has had one field office in a state as big and as important as Florida. It just doesn't happen.

Trump, as he is fond of reminding people, got more primary votes (13.3 million) than any other previous Republican candidate. But Romney, in a convincing national loss, got 60 million votes in 2012. (Obama got 65 million.) To grow the electorate by that order of magnitude, the first thing you have to do is build a mechanism to identify — and then turn out — everyone who is for you or leaning toward you. That's why you have field offices in swing states — so that people who work for you are living in key communities where you need to ensure you are maximizing your vote. You need to touch these people — door-knocks, pamphlets, phone calls, running into them at the grocery store — as many times as possible before Nov. 8 so that on that day they are certain to turn out and vote for you.

One field office in a state that cast more than 8 million votes in 2012 — Obama took 4.2 million, Romney 4.1 million — is campaign malpractice. There's simply no way around it.

Former RNC chairman Michael Steele noted that there’s this notion that the state party apparatus will take care of these get out the vote operations. That’s not how this works. Cillizza noted that Trump is going to need every die-hard Trump supporter, Republican-leaner, and independent-leaner to win this election. You can’t do that with one field office or three RVs.

At the same time, you could say that Romney spent a lot of time, money, and had many field offices in 2012, and still lost. Trump is something new, so let’s try it. Fair enough—we saw this message win out in the primary, but even with unconventional candidates (there's a 12-year-old running a campaign office in Colorado)—you still have to get out the vote. This assumption that people will just show up is riddled with peril. Moreover, Mr. Trump loves to use crowds as gauges for voter support. That’s not the best idea either, nor is this concept of banking on a hidden Trump vote. No doubt that there are secret Trump voters out there. No so sure about their numbers being so vast as to erase some of the leads Clinton has in states like Virginia.

On Oct. 29, 1984, Walter Mondale cited his enthusiastic crowds to debunk polls. A week later he lost by 18 points. pic.twitter.com/IQDEmmWRnb

Mondale's aides claimed there was a "hidden women's vote" and a large minority turnout that polls were missing. https://t.co/pigijAVDML

At the same time, Trump has been taking risks and they’ve reaped serous dividends. His latest trip to Mexico was seen as a huge gamble, yet he came off holding his own on stage, looking presidential, and dispelling any fears that he would be off the hinges abroad should he become our next head of state. Meanwhile, Clinton campaign avoided the press, had more bad news about the Foundation hit the printing presses, and tried to say that Trump choked abroad. Not really, guys.