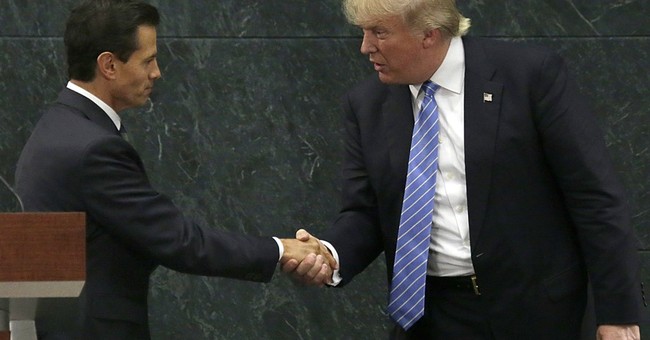 Some people, including members of the media, noticed that during Donald Trump’s meeting with Mexican President Enrique Pena Nieto, there was a Mexican flag on the stage, but not an American one. Was this weakness? Was this disrespect? Was it a sign that Trump was out of his element abroad? It was neither of those things. Donald Trump is the Republican nominee for president of the United States. Lylah Alphonse, managing editor of U.S. News and World Report, noted that Trump is not the head of state, hence no flag. So, everyone just relax—this was protocol being followed.

If anything, Trump looked good on stage. He looked presidential. He didn’t seem to be choking, though that’s what some on the Clinton team observed. Former Republican operative Nicole Wallace noted on MSNBC right after the press conference that Trump held his own on that platform, and that it dispelled any skepticism that the billionaire would be a disaster abroad. It was a good day for the Republican nominee. In fact, the past week has been good for him, which was so desperately needed after Cleveland. Stay focused, Mr. Trump. The polls are tightening, and he could get some serious traction if he does well in the upcoming debates, especially with things looking more competitive. At the same time, I know many wished he had exhibited and maintained the same discipline we see now many months ago.

At Trump-Peña Nieto meeting, there are 2 podiums w/ Mexican national seal, one Mexican flag. No American flag. Per @kevcirilli, who's there.

No US flag. Just a Mexican flag behind podiums for EPN Trump press statements in Mexico City. pic.twitter.com/Hj4GBDsEBJ