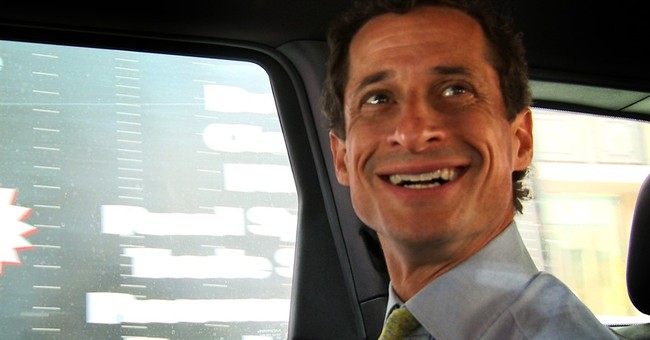 Donald Trump was being his usual colorful self when he went after former Rep. Anthony Weiner (D-NY), who is the husband of longtime Clinton aide Huma Abedin. Abedin has been the center of controversy for her role in the Clinton email fiasco, along with new revelations that she worked for a radical Muslim journal that blamed the United States for the 9/11 attacks. Trump has accused Abedin of possibly sharing sensitive information with her husband. This morning, the Republican nominee slammed the former congressman as  "pervert sleaze," which comes after his campaign manager said that he "doesn't hurl personal insults" (via the Hill):

What about the fact that Huma Abedin — who knows every single thing about Hillary Clinton, she knows more about Hillary than Hillary knows — and she's married to a pervert sleaze named Anthony Weiner, who will send anything that he has out over Twitter," Trump said on "Fox and Friends."

It's not the first time Trump has attacked the campaign of his general election rival through Weiner, who was forced to resign from Congress in 2011.

In June, Trump accused Abedin of sharing sensitive information with her husband, saying at the time, "Who the hell wants that? It's not right."

Weiner had been in the news recently for allegedly getting back to his old Carlos Danger online persona; with some flirty text messages to what he thought was a college student. He ended up getting catfished.

At the same time, out of all the things Trump has said over the course of this campaign, this is rather tame.

.@realDonaldTrump: Huma Abedin can't be trusted with Clinton info, she is married to a guy who can't control himselfhttps://t.co/C8zMz0wJzv