Wait–Trump Is For Amnesty Now? 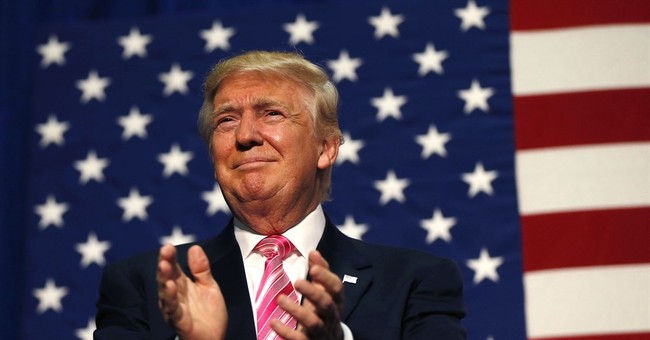 Remember the wall? Remember the beautiful gate that will be built to allow people to come here legally? Well, if Trump is elected in November (and right now that looks very slim), he might very well push for that construction project—but he’s also going to legalize most of the 11 illegal aliens already here. So, yeah, Trump supporters will get their wall, but they won’t get to boot illegal immigrants from the country—a policy proposal that has fueled Trump’s meteoric rise in the Republican Party. That’s the spinning in the rumor mill in the aftermath of a meeting the Republican nominee had with Hispanic leaders on Saturday, where the billionaire not only said he regretted his comments about Mexicans, he’ll shift on immigration as soon as next week (via NBC News):

Three of the Hispanics who are part of Trump's Hispanic Advisory Council spoke with NBC Latino after the meeting. Each spoke of an "open-minded" Trump who asked for their ideas on how to address the estimated 11 million people in the country without legal status.

Trump is to hold a news conference and rally in Colorado next Thursday and they said they expect details will come then.

"I think on Thursday we are going to have a plan that every Latino Democratic or Republican can be proud of as a very realistic, compassionate way of solving the problem," said Jacob Monty, an immigration attorney from Houston who also chairs the Latino-Jewis Alliance.

Jose Fuentes, a former attorney general of Puerto Rico, also attended the meeting. He said the meeting was held to replace the event that had been scheduled for Miami before the night club shootings in Orlando.

Asked whether Trump planned to back legalization for the 11 million here illegally, Fuentes said, "the definition of legalization - as you know it is wide, so what does it mean."

Fuentes said Trump brought up the issue of the 11 million undocumented in the country.

"We told him what we thought and he was very receptive. He agreed it is an important issue that needs to be dealt with and he is going to be reviewing some ideas we gave him."

"I don't think it's a shift. I think it's reality. He understands that this is an issue that it's important to the Hispanic community and he wants to find a way to deal with it in a way that's within the law and in a compassionate way," Fuentes said.

Univision had more on this meeting, which included the Trump camp saying that their position on the matter hasn’t changed. At the same time, Trump did alter course on his blanket ban on Muslim immigration into the United States. Is there a shift coming?

"I really liked that Trump acknowledged that there is a big problem with the 11 million [undocumented] people who are here, and that deporting them is neither possible nor humane,” said Jacob Monty, a Texas immigration lawyer who attended the meeting.

Trump told the group of conservative Hispanic leaders he would announce a plan to grant legal status "that wouldn't be citizenship but would allow them to be here without fear of deportation." said Monty.

Yes, I know Univision was in the legal crosshairs of Mr. Trump for breach of contract when they decided to drop their coverage of Miss USA and Miss Universe. Trump sued them for $500 million, which was settled in February of this year. Yet, the story has been making the rounds at other outlets, like our own Twitchy and

Still, let’s look at some factors that could sway the billionaire to go softy on the illegals. The first being, contrary to popular belief, that a good slice of Trump voters actually favor illegals staying in the country if they meet certain requirements. They’re also not keen on a humane deportation force that Trump says he wants to create to secure our borders. Lastly, Trump’s new campaign manager, Kellyanne Conway, drafted a memo in support of legislation that would create a pathway to citizenship for illegal immigrants. Last, he’s losing. Right now, Clinton would trounce Trump in a landslide. Time fro shake things up, though the window for that is rapidly closing. Also, Trump has said that tough immigration policies, like Romney's proposal for self-deportation, were "mean-spirited."

Still, for the kick ‘em out crowd’ that thinks Trump is going to be an immigration warrior, disillusionment is on the way. Just look at how Obama disappointed the Left with his inability to close Gitmo, Trump supporters are going to see how Trump will probably see that kicking out every illegal alien in the country is simply not realistic, unless we want to turn our security and law enforcement apparatus into something that resembles the Stasi. Moreover, there’s not enough political support on the Hill to appropriate the money for such a massive un-conservative undertaking.

It’s all very interesting. One that will surely cause the Never Trump and Trump or Bust camps to clash once again, with one side saying it’s unsubstantiated gossip while the other points out that his whole candidacy was a fraud from the beginning. It’s certainly possible Trump could mellow on this issue like he did with the Muslim ban, but knowing how he built his whole 2016 brand on this issue, it’s hard (again) to see him walking away from it.

In the meantime, debate among yourselves.