PSA: Wearing Stuff Saying 'Don't Tread On Me' Could Now Be Racial Harassment In The Workplace 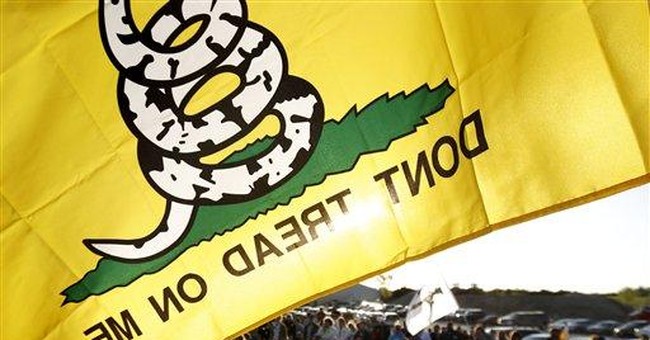 So, wearing “Don’t Tread On Me” paraphernalia may constitute racial harassment in the workplace. From a 2014 complaint filed with the Equal Employment Opportunity Commission, the folks who decide sift through hostile work environment claims at federal agencies, a person wearing such patriotic gear triggered “Sheldon D.” (not his real name) back in 2014. Lawyer Eugene Volokh blogged about this ridiculous case in The Washington Post, where the offended party cited the Gadsden flag as racially insensitive to blacks because its creator, Christopher Gadsden, owned slaves.

So did Thomas Jefferson. So did George Washington. You don’t see massive protests against him on President’s Day. Why? Because that would be insurmountably stupid, just like this claim, where a black liberal seems to have been trying to stifle his co-worker’s free speech rights. Heck, even the EEOC found that the flags origins are not racist, but because the flag has been associated with “racially tinged” messages as of late—an investigation can go forward. Volokh posted portions of the ruling and his legal analysis over this absurd assault of free speech:

After a thorough review of the record, it is clear that the Gadsden Flag originated in the Revolutionary War in a non-racial context. Moreover, it is clear that the flag and its slogan have been used to express various non-racial sentiments, such as when it is used in the modern Tea Party political movement, guns rights activism, patriotic displays, and by the military.

However, whatever the historic origins and meaning of the symbol, it also has since been sometimes interpreted to convey racially-tinged messages in some contexts. For example, in June 2014, assailants with connections to white supremacist groups draped the bodies of two murdered police officers with the Gadsden flag during their Las Vegas, Nevada shooting spree.

In light of the ambiguity in the current meaning of this symbol, we find that Complainant’s claim must be investigated to determine the specific context in which C1 displayed the symbol in the workplace. In so finding, we are not prejudging the merits of Complainant’s complaint. Instead, we are precluding a procedural dismissal that would deprive us of evidence that would illuminate the meaning conveyed by C1’s display of the symbol.

Volokh adds that in this complaint, Sheldon D. did not allege that the Don’t Tread on Me cap-wearer made racially offensive remarks. It’s pretty much a complaint stating that he doesn’t like a piece of American history because he is of such a soft constitution that he can’t tolerate other beliefs and opinions. Is this real life? A complaint was filed over a cap? This is a more sophisticated case of trigger warnings, safe spaces, and political correctness. It’s the part of the poisonous vein of progressivism, where anything they don’t like is considered racist, morally wrong, or both. Funny since they love to wear those Che Guevara t-shirts, who was pretty…racist in his feelings towards blacks, but I digress. Volokh adds his legalistic scenario showing how this is setting a nightmare precedent:

Let’s think about how this plays out in the workplace. Imagine that you are a reasonable employer. You don’t want to restrict employee speech any more than is necessary, but you also don’t want to face the risk of legal liability for allowing speech that the government might label “harassing.” An employee comes to you, complaining that a coworker’s wearing a “Don’t Tread on Me” cap — or having an “All Lives Matter” bumper sticker on a car parked in the employee lot, or “Stop Illegal Immigration” sign on the coworker’s cubicle wall — constitutes legally actionable “hostile environment harassment,” in violation of federal employment law. The employee claims that in “the specific context” (perhaps based on what has been in the news, or based on what other employees have been saying in lunchroom conversations), this speech is “racially tinged” or “racially insensitive.”

Would you feel pressured, by the risk of a lawsuit and of liability, into suppressing speech that expresses such viewpoints? Or would you say, “Nope, I’m not worried about the possibility of liability, I’ll let my employees keep talking”? (Again, the question isn’t what you may do as a matter of your own judgment about how you would control a private workplace; the question is whether the government is pressuring you to suppress speech that conveys certain viewpoints.)

Oh, you know this foul brew is going to come up again—bet on it. And all of it’s ridiculousness.