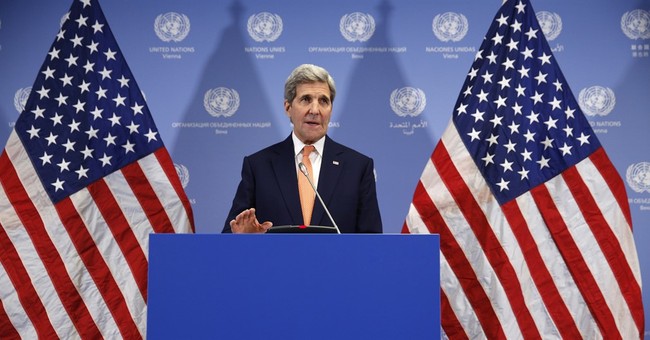 UPDATE: Cortney wrote earlier this morning that the State Department denies this was a ransom payment. Of course....of course, they do.

Let’s go back through time. Back to July of 2015, where CBS News’ Major Garrett asked President Obama about whether he was content about the four Americans that were still in Iranian custody, despite that fact that the Iran nuclear agreement was now a done deal. Obama was visibly irritated by the remarks, said he wasn’t content with the situation, Garrett should know better, and that his diplomatic assets were working to secure the release of the four Americans, one of which was The Washington Post’s own Jason Rezaian who was place under arrest under bogus espionage charges. In January of 2016, the Americans were freed, while we released an Iranian prisoner in return. Many outlets highlighted the Republican discontent with the transfer. At the time, Donald Trump—the Republican nominee—said that the deal was unfair.

As The Wall Street Journal reported last night, $400 million was airlifted to Iran at the same time the prisoners were being released. The payment was approved by the Obama administration, with cash injections going through the Swiss—who have acted as our messengers for diplomatic communication since 1979—and the Dutch, who then proceeded to dole out the cash in different currencies. The publication added that it couldn’t be in dollars since that would violate U.S. law. In his remarks about the prisoner release, he did not mention the $400 million payment. U.S. officials have denied any quid pro quo occurred in this transaction, whose timing is interesting. Since the money was transferred, Iran has continued to detain Americans. The Journal’s Carol Lee and Jay Solomon wrote about this story that’s sure to give Donald Trump much to rant about on the campaign trail:

The Obama administration secretly organized an airlift of $400 million worth of cash to Iran that coincided with the January release of four Americans detained in Tehran, according to U.S. and European officials and congressional staff briefed on the operation afterward.

Wooden pallets stacked with euros, Swiss francs and other currencies were flown into Iran on an unmarked cargo plane, according to these officials. The U.S. procured the money from the central banks of the Netherlands and Switzerland, they said.

The money represented the first installment of a $1.7 billion settlement the Obama administration reached with Iran to resolve a decades-old dispute over a failed arms deal signed just before the 1979 fall of Iran’s last monarch, Shah Mohammad Reza Pahlavi.

Senior U.S. officials denied any link between the payment and the prisoner exchange. They say the way the various strands came together simultaneously was coincidental, not the result of any quid pro quo.

But U.S. officials also acknowledge that Iranian negotiators on the prisoner exchange said they wanted the cash to show they had gained something tangible.

Since the cash shipment, the intelligence arm of the Revolutionary Guard has arrested two more Iranian-Americans. Tehran has also detained dual-nationals from France, Canada and the U.K. in recent months.

The Iranians were demanding the return of $400 million the Shah’s regime deposited into a Pentagon trust fund in 1979 to purchase U.S. fighter jets, U.S. officials said. They also wanted billions of dollars as interest accrued since then.

President Obama approved the shipment of the $400 million. But accumulating so much cash presented a logistical and security challenge, said U.S. and European officials. One person briefed on the operation joked: “You can’t just withdraw that much money from ATMs.”

Mr. Kerry and the State and Treasury departments sought the cooperation of the Swiss and Dutch governments. Ultimately, the Obama administration transferred the equivalent of $400 million to their central banks. It was then converted into other currencies, stacked onto the wooden pallets and sent to Iran on board a cargo plane.

On the morning of Jan. 17, Iran released the four Americans: Three of them boarded a Swiss Air Force jet and flew off to Geneva, with the fourth returning to the U.S. on his own. In return, the U.S. freed seven Iranian citizens and dropped extradition requests for 14 others.

The publication added that the Obama administration would not go into further detail on how this deal was paid for, other than no U.S. currency was involved. Lee and Solomon also wrote that CIA Director John Brennan recently said that the money injected into Iran via sanctions relief is being used for domestic projects, such as infrastructure, and not terrorist activities—though that remains a key concern. The world’s leading state sponsor of terrorism is using sanction relief for domestic purposes? I think the jury is out on that one, especially since Iran has been suspected of providing financial and military support to Syria to bolster the Assad regime.