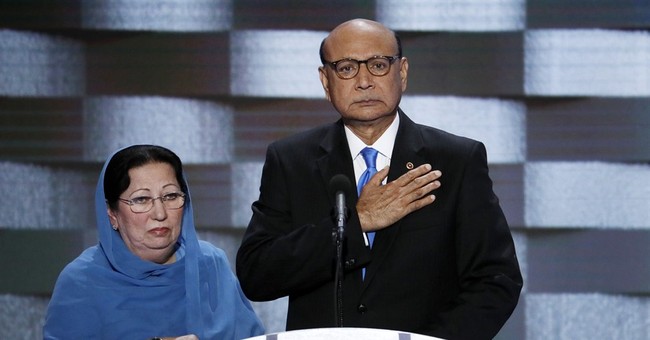 Guy touched upon the earlier today, but it needs to be repeated: the Trump campaign took a face full of buck shot when the Republican nominee went after the wife of Khizr Khan, Ghazala (who has since responded in a Washington Post op-ed), when the former addressed the Democratic National Convention last week. Khizr ripped Trump, saying he knew nothing of sacrifice and was illiterate when it comes to the Constitution. In 2004, the Khans lost their son, Army Captain Humayun Khan, in Iraq.

Trump responded by wondering why Khizr’s wife, Ghazala, didn’t say anything when the two were on stage in Philadelphia, possibly hinting that their religious beliefs prevented her from speaking. Both of the Khans are Muslim—and their presence was to pay tribute to Humayun’s sacrifice and remind the country that Muslim Americans are patriotic too. Fair enough. Trump could’ve simply thanked the Khans for their son’s service, or asked what George W. Bush Would Do? Which would’ve been to say nothing at all. Instead, we’re now sucked into a media maelstrom that is wasting precious time attacking Hillary Clinton.

On the flip side, we have to sit through the media double standard, where if the Republicans bring out a Gold Star mother–Patricia Smith–they’re being manipulative of her grief, while the Democrats do the exact same thing and praise them for ripping Trump. Oh, and Clinton also called Smith, who lost her son Sean in the Benghazi terrorist attack, a liar. To pour more salt in the wound, Clinton said that Smith and the father of Tyrone Woods, another Benghazi victim, might have suffered some sort of amnesia in their grief, which is why their accusation that she told them that a video was responsible for the assault might not be credible. At the same time, Trump poured some salt of his own into the family wounds of the Khans. It’s just a mess—and totally indefensible.

To make matters worse, you have a former Trump adviser accusing Mr. Khan of being an agent for the Muslim Brotherhood. Former campaign manager Corey Lewandowski said that Khan’s son would’ve been alive if Trump were president, because we never would’ve invaded Iraq.

The Veterans of Foreign Wars also criticized Trump, calling his remarks “out of bounds.” Sens. John McCain (R-AZ), Mitch McConnell (R-KY), and Speaker of the House Paul Ryan have all condemned Trump’s decision to go after the Khans.

Trump is the Republican nominee. He wasn’t my first choice (obviously), but he won and we should all try to defend him when we can—but not for this. Yes, Vote Vets is known to be cozy with the Democrats, but there’s little you could do with this—concerning spin— without making you look nothing but callous. Lewandowski proved that point. Not to mention, I’m not so sure that Vote Vets was wrong for releasing a letter from these other Gold Star families denouncing Trump’s actions. He stepped in it—and he didn’t need to. The only thing I can say is that the media is ignoring Hilary’s remarks against Ms. Smith, basically calling her a liar over the Benghazi fiasco. I guess the only saving grace for Trump is that this might not shift the needle, as voters have pretty much made up their minds about the characters of both candidates. Nevertheless, this will dominate the news cycle for a bit—and it was totally avoidable.