Journalist: If Trump Doesn't Release His Taxes, Media Should Stop Interviewing Him 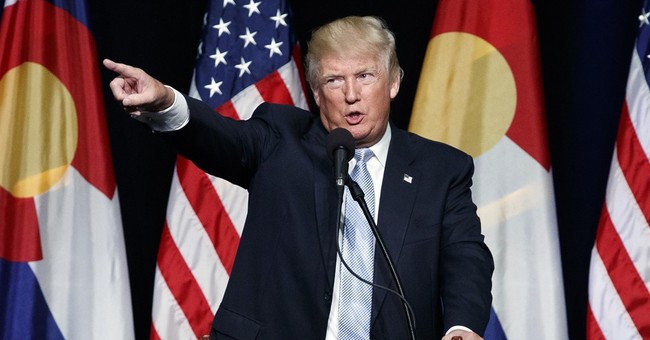 Well, it seems as if National Journal’s Ron Fournier has had it with Trump’s tax return fiasco. Fournier, who also writes for The Atlantic, said that if the billionaire refuses to release his tax returns, then the news networks should refuse giving him airtime:

The media is nothing if it can’t hold a presidential candidates accountable—if newsrooms and editorialists can’t force a White House aspirant to keep a promise, uphold precedent, and address suspicions that he’s a tool of Moscow.

Journalism is a joke if we let Donald Trump slide.

And so I have an idea for CNN, MSNBC, FOX News and the three broadcast networks:

Stop interviewing Trump, and stop paying his surrogates, until he releases his tax records.

Now, to be fair, Fournier has criticizes both presidential candidates, Clinton especially for her email fiasco. Yet, is Trump one to back down? I’m not so sure that media colluding to refuse to coverage of a major presidential candidate is going to be a successful pitch to boardrooms. In fact, one could argue that if all of the networks continued to interview Trump about his tax returns, and applied pressure on that front through endless negative media coverage to that effect—it could have the same impact.

Either way, both angles could animate the Republican base, which always gets fired up over allegations of liberal media bias, or the mere appearance of it. Trump’s die-hard supporters, along with your run-of-the mill Republicans (who might agree that that their candidate should release those forms), could view this as bush league. He’s the Republican nominee; he should be covered in the news.

Moreover, Trump is a master of media. He’ll find a way to get his name mentioned one way or another. Whether that is utilizing Twitter, Facebook Live, Medium, or Periscope—the man will hire more folks that know social media, and saturate it to the point where networks would be remiss in not covering the story. When the House GOP shut off the cameras by calling a recess during the Democratic sit-in on the floor aimed at pressuring Speaker Ryan to hold a vote on gun control post-Orlando, C-Span simply used Facebook Live and Periscope to continue coverage. I’m sure Trump will be able to creep back into the news cycle if this were to happen, which is unlikely.

UPDATE: From the comments, RCA In NH noted the lack of Clinton press conferences, which Guy wrote in June, that it's been a half a year since Hillary held such a media event. Cortney wrote about Clinton campaign manager laughed off questions about when the former secretary of state will hold her next one during the Democratic National Convention. Could be a nice counterpunch to this unlikely media suggestion regarding Trump's tax returns. If you don't want to interview me over this tax thing, you shouldn't grant Hillary either for being evasive with the press conferences.