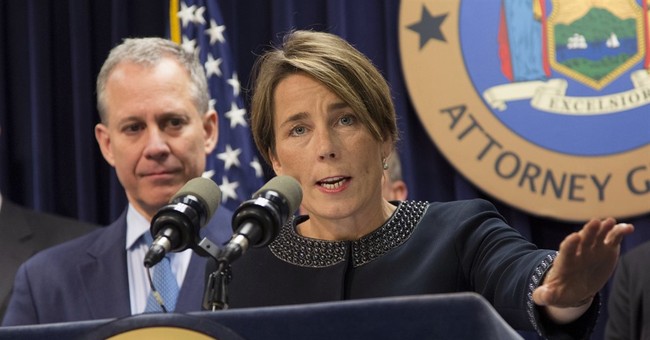 With most of the media attention on the Republican National Convention (Melania Trump’s speech)—the Massachusetts Attorney General seems to have decided to unilaterally rewrite the state’s gun laws. The attorney general is targeting so-called copycat assault weapons (their words not mine) and would force manufacturers to stop making them and gun dealers to stop selling them. The law goes into effect on July 20. Those who have bought the firearms being targeted prior to that date will be allowed to keep them (Mass Live):

Gun manufacturers have manufactured these weapons as legal versions of prohibited guns," Healey said. "These weapons are illegal. They are copies or duplicates of banned weapons, and they cannot be bought or sold in Massachusetts."

"The gun industry doesn't get to decide what's compliant (with state law)," [Attorney General Maura] Healey said. "We do."

Gun owners, however, said they had no notice of Healey's interpretation of the law and were still unsure of what would be included.

Advocates for the gun industry warn that Healey's ban is likely to face a legal challenge.

"You have a person that's unilaterally changing the laws without actually going through the process, then telling licensed retailers they're not allowed to sell something basically with no notice," said Jim Wallace, executive director of Gun Owners' Action League of Massachusetts, a gun rights advocacy group. "This is going to be probably a very interesting legal challenge at some point."

Healey's directive to gun manufacturers clarifies the definition of "copy." Under Healey's definition, if a gun's operating system is the same as that of a banned weapon or it has components that are interchangeable with those in a banned weapon, the gun will be illegal to sell in Massachusetts.

According to Healey's office, an estimated 10,000 "copycat" assault weapons were sold last year in Massachusetts.

In Virginia, Attorney General Mark Herring unilaterally changed the state’s reciprocity laws on concealed carry permits, which drew the ire of Second Amendment supporters. After months of grassroots pressure and legislative maneuvering, Democratic Gov. Terry McAuliffe signed a deal that not only restored the reciprocity agreements set to be severed, but also expanded them. It also barred the attorney general from making such sweeping legal moves on gun rights in the state. Yet, that’s a state with a Republican legislature. For Massachusetts gun owners, don’t count of such a miracle to happen.