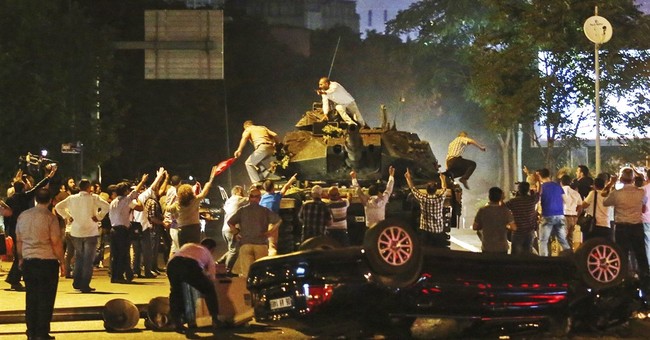 Last night, there was an attempted military coup against Turkish President Tayyip Erdogan. Tanks and troops were seen in Istanbul and Ankara, state-run Turkish Radio and Television Corporation was taken over, allegedly the head of the Turkish Armed Forces was taken hostage, and parliament was bombed. Erdogan was on vacation when this action as taken by some in the military. Both Erdogan and his prime minister, Binali Yildirim, weren’t taken hostage by the military, which would’ve been a key objective. Instead, the president was able to Skype into Turkish news outlets, demand mass protests, and the coup has seemingly failed.

In the aftermath, almost 3,000 Turkish troops have been arrested, over 2,700 judges have been fired, and Erdogan will probably have a tighter grip on power. The signs that the coup would be unsuccessful was when Erdogan flew back to Turkey—landing in Istanbul, which observers noted would not have happened if he felt the situation was unsafe. Some sources had told Sky News that a substantial part of the military was involved, not just a few colonels. Those observations seem to be inaccurate. Erdogan has called the actions of the coup plotters an act of treason, and vows to cleanse those elements (via Politico):

Turkish President Recep Tayyip Erdogan flew to Istanbul in the midst of an attempted military coup and issued a defiant statement early Saturday, promising the armed forces would be “cleansed,” saying the coup had failed and that many perpetrators had already been arrested.

TRT and CNN Turk were both temporarily shut down by the coup plotters, who announced that they were attempting to takeover the government in the name of democracy and human rights. They tried to impose a curfew and martial law, which has hampered when thousands of demonstrators took to the streets, which ended in confrontations that led to the deaths of 265 people (104 coup plotters and 161 civilians and police).

Turkey is now poised to become a more autocratic state with Erdogan, and this coup just made that easier. The military is going to get pummeled in the days ahead. While Vox has pieces that satisfy the progressive ethos, this summary of the Turkish situation is very good–and show the historic role of the military in these constitutional matters:

The Turkish military sees itself as the guardian of Kemalism, and has overthrown four Turkish governments since 1960 in the name of protecting Turkey’s democracy from chaos and Islamic influence. Each time afterwards, the military has returned the country to democracy — though in a degraded form.

Erdogan is clearly a threat to Turkish democracy and secularism. He leads the AKP, a moderate Islamist party that has "reformed" Turkish schools along Islamist lines. He’s cracked down on Turkey’s freedom of the press and pushed constitutional changes that would consolidate dangerous amounts of power in the president’s hands.

Ironically, this could help Erdogan’s quest for authoritarian control in Turkey. If he is perceived as the defender of Turkish civilian government, his popularity could well soar. He could leverage this popularity into votes in Turkey’s parliament for constitutional changes granting him extraordinary powers, his longtime objective.

Below is footage of coup plotters surrendering and being arrested by police after the attempt seems to have all but failed.