Did Rep. Charlie Rangel Compare The GOP To The Ku Klux Klan Again? 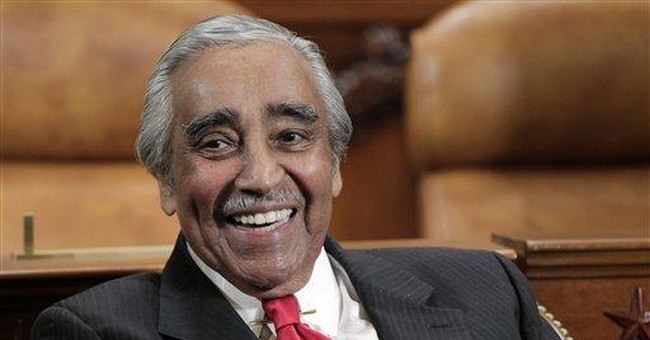 Remember when Rep. Charlie Rangel (D-NY) said that the Republican Party was the party of the Ku Klux Klan? Well, this time he’s saying that Donald Trump has destroyed the Republican Party, but did some good by pulling the sheet off of the GOP. Yeah, well, he may be at it again (via The Hill):

"If you want to force me to say something good about Trump, I would say, yes, I am so glad he's pulled the sheet off the Republican Party, because now that he's completely destroyed the party of Lincoln, I want a decent two-party system when this election's over."

I think we have a good idea as to what pulling "the sheet off" means given his past remarks about Republicans.

In April, Rangel told MSNBC’s Andrea Mitchell that “We are seeing the end of the Republican Party as we know it, a party that has the Ku Klux Klan, has the Tea Party, the Freedom Party, and this used to be the Party of Lincoln, and we’re seeing it fall apart.” They were discussing Vermont Sen. Bernie Sanders and the wave of populism seen during this election cycle. As many of you probably already know, the KKK supported the Democrats.

Back in 2014, Rangel went off again, with nonsensical remarks that Southern Republicans still supported slavery. Even liberals had enough with these remarks, with ESPN’s LZ Granderson bluntly saying at the time, “If you think what he says is true, then I’m just going to tell you the truth: you’re an idiot.” He also asked why Rangel is still in office.

Well, when you live in a super safe Democratic congressional district, you can pretty say what you want without fear of political retribution from the voters.