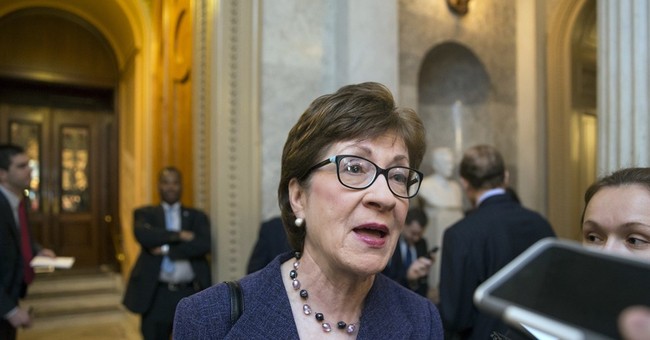 Katie already wrote about the due process nightmare that is the Collins Amendment, which would allow the attorney general to block gun sales to anyone on the no-fly or selectee lists that are maintained by the FBI. As she wrote, we’re going to empower the attorney general to decide who and who is not a terrorist when it comes to guns; the AG also has the authority to approve sales flagged based on the use of these lists. We’re still stripping Americans of their gun rights based on suspicion rather than due process of law. In all, it’s a line-by-line take down of a very bad bill.

This afternoon, the Senate voted on this measure and one put forward by Sen. Ron Johnson (R-WI), where a motion to table the amendments was brought forward. Collins’ Amendment garnered 52 votes, which prevented her measure from being cast into the legislative abyss. Roll Call reported that Johnson’s amendment would’ve placed the burden of proof on the federal authorities to stop a gun sale to a potential terrorist instead of a would-be buyer going through an appeal process. It only received 31 votes, killing the amendment since it didn’t garner majority support:

The bipartisan measure backed by Sen. Susan Collins, a Maine Republican, received support from 52 senators, enough to keep it from being tabled indefinitely but not enough to secure its eventual passage.

Collins said she will continue to seek a path forward fpr her proposal to limit people on some terror watch lists from buying guns. She also said the vote today fulfills the Republican leadership's promise that her measure would get a vote.

Immediately after what he called a "show vote," Minority Leader Harry Reid, D-Nev., called on the Republican leadership to bring the measure to the floor and adopt it as an amendment to a spending bill.

Sen. Charles E. Schumer, D-N.Y., echoed that request in a statement, saying, "The NRA has such a grip on GOP leadership that they won’t even give bipartisan compromises a fair shake. Now that Senate Republicans’ attempt to bury this amendment has failed, Senate Democrats call on our Republican colleagues to give this proposal a real vote and a chance to become law next week.”

On Thursday, her proposal faced a procedural vote known as a "motion to table," a tactic to dispose of a question before the Senate. If senators agreed to the motion, the amendment would have died.

The bill received 52 votes, meaning that it survives to face another vote. But when the amendment will be considered again is unclear.

It’s also unclear as to who will crossover to pass this amendment. Collins would need eight more Republicans to sign off on an atrocious piece of legislation. Moreover, Omar Mateen, the Orlando killer, wasn’t even on any terror watch list. He was for a brief time when he was under FBI investigation; he was later removed when those inquiries concluded that he hadn’t broken any laws at the time. He also purchased his firearms legally, and he had a firearms license from the state of Florida. More background checks and shredding due process to keep guns out of the hands of would-be terrorists wouldn’t have prevented this shooting. No one is for giving terrorists access to firearms. That’s nonsense. Democrats are saying these measures are aimed to prevent future, similar-style attacks. That’s fine. But how about we don’t set the Constitution of fire while were at it. While the American Civil Liberties Union might be a thorn in the side at times, they're right on this issue. As Christine noted, they sent a press release urging lawmakers to reject this amendment.