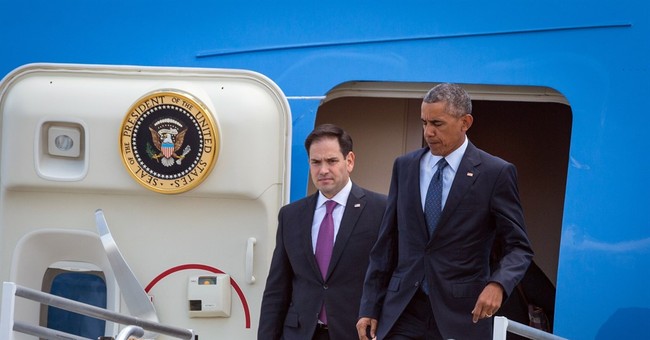 Republican Congressman David Jolly is dropping out of the Senate race and will instead run for re-election for his House seat, according to the Tampa Bay Times. Jolly will likely be taking on two-time loser, former Florida governor, and Republican-turned-Democrat Charlie Crist, who announced he would be seeking the Democratic nomination in Jolly’s district. Crist had previously ruled out running for office in 2016 (via Tampa Bay Times):

"David Jolly's passion is to serve the people of Pinellas," Baker said. "He learned at the side of Congressman Bill Young and he has effectively served all parts of our county. I strongly endorse his candidacy and his reelection."

Jolly, a Republican from Indian Shores, is scheduled to meet with the media at noon at Clearwater Aviation to talk about his political future.

In July 2015, Jolly jumped into the Senate race after incumbent Sen. Marco Rubio announced he would not seek re-election and instead run for president. Four other Republicans are also running in the race to replace Rubio, but none have surged to the forefront causing national Republicans to become increasingly worried that none can win in November.

But this week, Rubio told reporters he is considering it after telling a national radio talk show host that the tragedy in Orlando had given him pause to think about how he could serve the nation. Rubio has to decide by June 24, the deadline to enter the race, the deadline to qualify to get on the ballot.

Jolly has said for two weeks he expects Rubio to run for re-election now, and he has no interest in running against him.

FL GOP Rep Jolly on CNN on FL Senate: "Marco is saying he in getting in"

Yet, the real question is does this mean Sen. Marco Rubio is running for re-election? The Florida Republican made it very clear towards the end of May that he wasn’t running, urging donors to back Lieutenant Gov. Carlos Lopez-Cantera. At the same time, Senate Majority Leader Mitch McConnell and presumptive Republican nominee Donald Trump have been placing pressure on Rubio to run for re-election, as the party’s Senate majority is in danger of being swept away.

On June 15, Rubio said that he had a conversation with the LG over the weekend, and that he would be going home later in the week to spend time with his family. A decision on whether he would seek re-election to the Senate would come shortly if he has indeed changed his mind. So, obviously, things have changed. Tampa Bay also added that Lopez-Cantera and Rep. Ron DeSantis have also said they would not challenge Rubio should he enter the race, yet Carlos Beruff, a real estate developer, and Todd Wilcox, an Orlando businessman, have said they would run against Rubio.

Yet, The Washington Post noted some difficulties that Rubio could face heading into a re-election fight. First, Trump beat him badly in his home state, his approval ratings are below 50 percent, and he could be seen as opportunistic running after a likely terrorist attack. The latter point is a bit shoddy since Obama and the Democrats are politicizing the attack to push for gun control, even though most Americans know this isn’t a gun issue. Still, approval ratings can go up, and there are some good things going for Rubio, incumbency advantage aside:

Senate Republicans want him to run. None other than Senate Majority Leader Mitch McConnell (R-Ky.) has urged Rubio to run for reelection. So have a bunch of other Senate GOP leaders. That Rubio has fans in some very powerful places who are willing to help him get reelected counts for something (though perhaps less so in the Year of Trump).

Lots of Republicans want him to run. A recent Florida-based polling firm, Mason-Dixon, indicated that almost half of the state's voters — including 77 percent of Florida Republican voters — want Rubio to run again. That might suggest that for Florida GOP voters, some of Rubio's potential pitfalls pale in comparison to the lackluster field they've got right now. At the least, it suggests he'd have little trouble securing the GOP nomination, if there were any doubt about that.

He can bring in money. Florida is one of the most expensive states in the nation to run a statewide campaign; there are 10 media markets candidates have to play in. Rubio, having just run a national presidential campaign, is a proven, successful fundraiser. Senate Republicans hope that if Rubio gets in, in addition to improving their chances in Florida, they could spend their time and money elsewhere in their arduous battle to keep control of the Senate. (Caveat here: The two candidates who have indicated they'll run against Rubio in the primary are wealthy and seem willing to spend it to get their names out there.)

Some polls show him winning. Republican insiders are circulating polls that show Rubio easily winning the primary and then defeating both of his potential Democratic opponents, Reps. Patrick Murphy and Alan Grayson, by large margins (Murphy is far preferred to Grayson by Democratic leaders). Democrats cite an automated Democratic-leaning poll that shows Rubio basically even with Murphy but, among voters who have heard of both candidates, losing by 22 points in a hypothetical matchup.

So, for now, it’s Rubio watch—well, the watch where he makes his 2016 Senate intentions official.