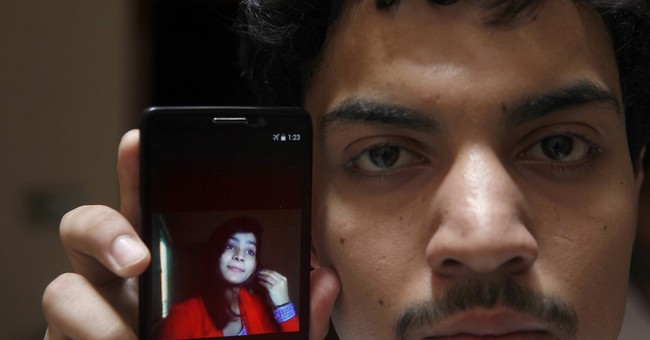 The Islamic State burned 19 Yazidi women alive for refusing to sleep with their captors. Now, a Pakistani mother, with the help of her son, burned her daughter alive for marrying the wrong man. The mother was arrested by police, admitted the crime, and remained unremorseful. “I don't have any regrets," she said (via Associated Press):

A woman in Pakistan burned her 17-year-old daughter alive on Wednesday to punish her for marrying against the family's wishes, the latest in a series of so-called "honor killings" that claim the lives of nearly 1,000 women every year in the conservative Muslim country.

Police say Zeenat Rafiq's mother, Parveen, tied her to a cot and drenched her with kerosene before lighting her on fire. Neighbors in the congested, working-class neighborhood in the eastern city of Lahore came running when they heard the screams, but family members kept them from entering the house, said Nighat Bibi, who lives nearby.

The police eventually arrived and found the charred body near a staircase. They arrested the mother soon thereafter.

The victim's husband, Hassan Khan, told reporters the two had been "in love since our school days" but the family had rejected several marriage proposals, forcing them to elope last month. He showed an affidavit of consent signed by his wife before a magistrate. He also showed cellphone photos of a smiling Zeenat wearing a red dress.

Sheikh Hammad, a local police official, said Parveen confessed to killing her daughter with the help of her son Ahmar. He quoted the woman as saying "I don't have any regrets." Another police officer, Ibadat Nisar, said the body showed signs of beating and strangulation.

Khan told The Guardian that Zeenat’s family lured her back home under false pretenses. They said they would throw them a proper wedding reception—and only went back after one of her uncles promised that she would be unharmed. Zeenat was fully aware that she could be the possible victim of an honor killing:

In a television interview with Geo News, Khan said his wife had been duped into returning home. “After living with me for four days following our marriage, her family contacted us and promised they would throw us a proper wedding party after eight days,” he said.

“Zeenat was unwilling to go back to her home and told me that she would be killed by her family, but later agreed when one of her uncles guaranteed her safety.

“After two days, she called me and said that her family had gone back on their word and asked me to come to get her, but I told her to wait for the promised eight days. Then she was killed.”

Perveen’s younger sister Naseem told AFP: “After killing her daughter, Perveen went out on the street, took off her shawl and started beating herself on her chest, shouting: ‘People! I have killed my daughter for misbehaving and giving our family a bad name.’

Under current laws family members are allowed to forgive the killer, forcing prosecutors to drop even the most watertight case.

It often leads to killers walking free in situations where entire families agree that a daughter has brought shame on them.

Last November, Katie wrote about how honor killings in America are on the rise. Killing your own child because they brought shame, or married the wrong person, is madness. And what happened here isn’t some insight into the dark corners of a particular culture. It’s twisted, some could say evil.