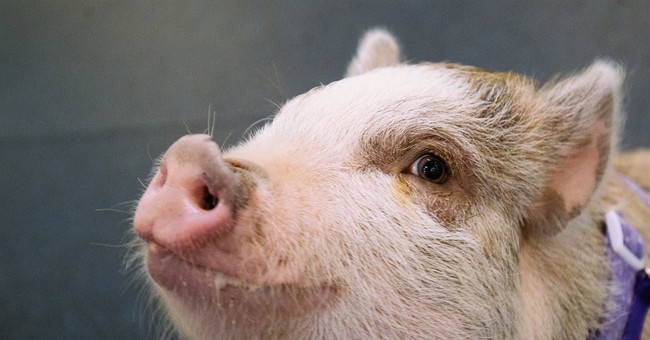 Citizens Against Government Waste (CAGW) released their annual pig book this morning, and it’s quite depressing. The non-profit added that the average dollar amount for earmarks for fiscal year 2016 was a whopping $36.6 million compared to the FY2010 average of $1.1 million. In all, there were 123 earmarks for FY 2016, a 17.1 percent increase from FY 2015, which saw 105 instances of porker spending. Total porker spending topped $5.1 billion this year, a 21.4 percent increase from last year’s total of $4.2 billon. CAGW lists seven ways government spending can make their porker book; all items featured this year satisfy at least one of the criteria, though they noted that most meet two. A lot of the top items rest in the Department of Defense:

$10,000,000 for high energy cost grants within the Rural Utilities Service (RUS). The RUS grew out of the remnants of the Department of Agriculture’s Rural Electrification Administration (REA) of the 1930s. The primary goal of the REA was to promote rural electrification to farmers and residents in out-of-the-way communities where the cost of providing electricity was considered to be too expensive for local utilities. By 1981, 98.7 percent electrification and 95 percent telephone service coverage was achieved. Rather than declaring victory and shutting down the REA, the agency was transformed into the RUS, and expanded into other areas.

$60,000,000 for construction of research facilities at the National Institute of Standards and Technology (NIST). According to the legislation, the funding is to initiate “the design and renovation of its outdated and unsafe radiation physics infrastructure in fiscal year 2016.” Though the legislation does not designate a location for the funding, NIST’s Radiation Physics Division operates facilities in Boulder, Colorado, and Gaithersburg, Maryland.

$1,150,800,000 for 28 earmarks for health and disease research under the Defense Health Program, which is a 7.8 percent increase in cost over the 27 earmarks worth $1,067,115,000 in FY 2015. Former Sen. Tom Coburn’s (R-Okla.) November 2012 report, The Department of Everything, pointed out that the DOD disease earmarks added by Congress mean that “fewer resources are available for DOD to address those specific health challenges facing members of the armed forces for which no other agencies are focused.” According to the report, in 2010 the Pentagon withheld more than $45 million for overhead related to earmarks, which means those funds were unavailable for national security needs or medical research specifically affecting those serving in the military.

$1,000,000,000 for one additional DDG 51 ship, an Arleigh Burke-class destroyer. The DDG 51 has a long history of receiving earmarks from members of Congress, including $720 million requested by then-Senate Majority Leader Trent Lott (R-Miss.) in FY 1998. Like many legislators, Sen. Lott was unrepentant in his pork-barreling, stating “I’ll do anything for that [Ingalls] shipyard,” the DDG 51 construction site. Since FY 1991, members of Congress have added 21 earmarks for the DDG 51 program, costing taxpayers $2.7 billion.

$255,000,000 for two additional F-35 Joint Strike Fighter (JSF) aircraft for the Navy. The acquisition misadventures of the JSF program have been well-documented. In development for nearly 15 years and four years behind schedule, the program is approximately $170 billion over budget and has encountered an abundance of persistent issues.

$549,594,000 for 15 earmarks for the Army Corps of Engineers, a 51 percent increase in cost from the $363.9 million in FY 2015. President Obama’s FY 2017 version of Cuts, Consolidations, and Savings recommended reducing the operations and maintenance budget for the Corps of Engineers by $432 million.

Legislators have long treated the Army Corps of Engineers as a prime repository of pork, and it is among the most heavily earmarked areas of the federal budget. Since FY 1996, members of Congress have added 6,902 earmarks for the Corps, costing taxpayers $12.2 billion.

You can read the rest here.