If Trump Wins The Nomination, The House Is In Play, Believe Me 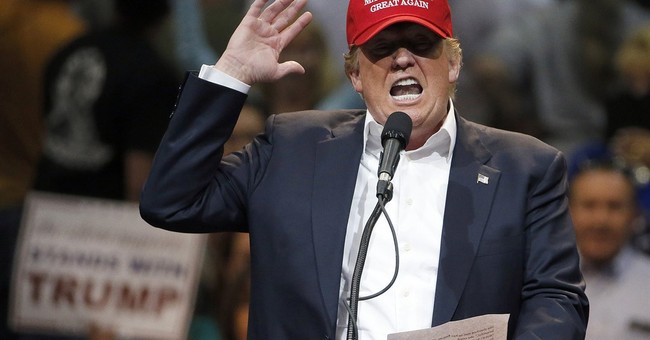 If Donald Trump manages to win the Republican nomination this year, the House of Representatives is in play, believe me. The lower chamber once thought to have a solid Republican majority for possibly a generation could be undone by the billionaire magnate, who faces defeat in November against an appalling weak Democratic candidate in Hillary Clinton. Polls show that Trump, like Clinton, would be a weak general election candidate. David Wasserman of the Cook Political Report wrote earlier this month about the Republican grip on the House becoming increasingly shaky.

Epitaphs for the Republican Senate majority were already being chiseled, given that the Senate field heavily favors Democrats this November, but even Charlie Cook noted that Trump’s “tremors” down ticket could be…tremendous:

Of these seven competitive Senate races, four are in some of the very closest presidential states—Florida, Nevada, New Hampshire, and Ohio. Loud foot­steps up­stairs in the presidential race could easily shake the Senate races below. If Republicans were to lose the presidency by a margin wider than McCain’s loss in 2008 and Romney’s defeat in 2012, hanging onto the Senate would be a long shot at best.

The House is no longer particularly sensitive to small-to-moderate shifts in the political winds. Incumbents are protected by natural population patterns—Democratic voters concentrated in urban areas, close-in suburbs, and college towns, and Republicans in small-town, rural America, and outer ring suburbs—by the political gerry­mandering pursued by both parties for generations. Demo­crats need a 30-seat net gain to capture a House majority, a particularly tall or­der given the current distribution of seats and the way district lines are drawn.

Cook Political Report House Editor David Wasserman has written in re­cent days that it is now pos­sible that the GOP House majority could be in danger. A far more plausible scenario, assuming the GOP presidential ticket is weak, would be a loss of a dozen or more seats for Republicans, cutting their House margin in half. Given the GOP’s difficulty in pushing through legislation even with the largest House majority since 1928, Paul Ryan will have a devil of a time winning votes if he loses this cushion.

All of this is why it is so interesting to see so many congressional Republicans sitting on the sidelines of this potentially pivotal GOP nomination contest. If the hard-core conservatives in the Freedom Caucus members consider Ryan and Boehner squishy moderates, what will they think of Trump, whose ideological roots are so shallow that they don’t even add up to a political philosophy?

National Journal’s Josh Kraushaar is a bit more brutal in his analysis of a Trump candidacy. In short, everything the GOP has gained over the past six years could be washed away:

Trump is viewed favorably by fewer than one-quarter of voters, even though he’s well-known by nearly everyone. Even if he proves successful in turning out blue-collar voters, surveys show that he turns off around one-quarter of the GOP electorate and will be a mobilizing force for Democrats who have been lukewarm toward Clinton.

When it comes to Senate and House races, a combination of depressed Republican turnout and an energized Democratic base would make a toxic brew in November. Benefiting from a favorable map, Senate Democrats have re­cruited solid candidates to run in 12 of 13 targeted GOP seats, only missing out in North Carolina. They even landed a respected lieutenant governor to run against entrenched Sen. Chuck Grassley in Iowa. If there’s a wave election, Democrats won’t just barely take back control of the Senate, but could come close to double-digit gains.

In the House, Democrats would need to net 30 seats to win back a majority, but in a wave election, underdogs often prevail. The Cook Political Report rates 31 GOP-held seats as competitive (either as toss-ups or lean Republican). Of those 31 districts, 23 are based in urban or suburban areas where Trump’s brand of populism is unlikely to be a selling point.

The reality is that Trump’s nomination has the potential to reverse the gains that Republicans have spent the past six years build­ing up—with President Obama out of the picture after 2016. You’d think that party leaders would be raising holy hell to protect their hard-earned gains. Instead, they’re whistling past the graveyard.

Yes, there are some Tea Party Republicans, and Trump supporters, who might feel like this is much deserved. Republicans campaigned on stopping Obama, yet Obamacare is still law, Planned Parenthood is still funded, and we raised the debt ceiling for the next two years in a budget deal that seem to give the House away. I have nothing good to say about the latter; the only silver lining is that we won’t have to undergo a replay of government Shutdown Theater during an election year. At the same time, the conservative wing of the GOP, led by Rep. Mike Meadows (R-NC), Sen. Mike Lee (R-UT), Sen. Rand Paul (R-KY), Sen. Marco Rubio (R-FL) and Ted Cruz (R-TX), tried to push an appropriations continuing resolution that would have defunded the Affordable Care Act in 2013, which led to the shutdown. It failed since the Republicans were a) not in the majority in the Senate (so no way they could muster the votes for a veto override) and b) President Obama would never sign off on defunding his signature domestic achievement.

Like in 2010, 2014 proved to be another wave election for the GOP, where they amassed the largest House majority since 1928 and picked up nine senate seats. In return, Congress was able to push through via reconciliation a bill that would have gutted key portions of Obamacare and defunded Planned Parenthood for a year. According to the Congressional Budget Office, the bill would’ve cut the deficit by $516 billion over the next ten years. It wasn’t perfect, but it was a step in the right direction. Of course, Obama vetoed the legislation, and Republicans did not have the votes to override it.

Again, it’s hard to clinch key wins without your party controlling the White House. Could Congress do more to stop Obama? Yes. But they were able to do what they’re constitutionally allowed as legislators–pass a bill that would’ve stripped funding for Planned Parenthood and key parts of Obamacare–and got it to the president’s signature after dozens of times coming up short due to a Democratic-controlled Senate. That’s progress. That’s all Congress could do. They got a bill that satisfies what the conservative base wanted, but of course, got torpedoed since we couldn’t boot Obama back in 2012. Again, we could’ve done a better job, and some argue that the 2012 presidential election was the last chance for a clean repeal before the law went into full effect. Yet, to say that Congress has done nothing to stop Obama isn’t accurate. They did what they promised to do within the confines of the Constitution and separation of powers. They got a repeal bill (that also put in the crosshairs the largest abortion provider in the country) to his desk. The next step is electing a pro-life president to finish the job.

Changing laws takes time. That’s something that some Tea Partiers, and Trump supporters, miss; a bad bill could take a few election cycles to fix. Updating or revising good ones could also be on a similar time frame.

Heck, in even in our judicial system, bad decisions could take decades to reverse; it took 58 years to trash the unconstitutional codification of “separate but equal” established under the Plessy v. Ferguson ruling.

The lethargic speed of government is good. It means (in a general sense) that the mechanisms that ensure our safety from overreach are working. Granted, if we should win in 2016, the use of executive orders (and the revocation of the ones handed down under Obama) should be the subject of debate. But, overall, government is meant to move slowly, even when both sides want it to move at an accelerated rate.

The Republican Party is moving closer to either erasing, or severely curtailing, the Obama legacy regarding Obamacare. This was proven when the reconciliation bill was passed. All we need is a Republican president to sign it during the next Congress, but Donald Trump seems to be poised to nuke that progress. A Trump nomination could spell total disaster for the party (he doesn’t put anything in play), believe me. Maybe that’s what a lot of Trump supporters are banking on, given that many of them are Democrats.

Here's what the map might look like in an election held today. Trump's Rust Belt strength would help him keep MO, IN pic.twitter.com/OYueYvWFpG